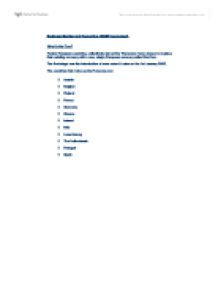 What is the Euro?

Business Studies and Economics GCSE Coursework What is the Euro? Twelve European countries, collectively named the 'Eurozone', have chosen to replace their existing currency with a new, single European currency called the Euro. The final stage was the introduction of euro notes & coins on the 1st January 2002. The countries that make up the Eurozone are: * Austria * Belgium * Finland * France * Germany * Greece * Ireland * Italy * Luxembourg * The Netherlands * Portugal * Spain Value Front Reverse �5 �10 �20 �50 �100 �200 �500 1 Cent Coin 2 Cent Coin 5 Cent Coin 10 Cent Coin 20 Cents Coin 50 Cents Coin 1 Euro Coin 2 Euro Coin The UK has decided not to use the Euro currency at this present time, remaining with the Pound Sterling. But the UK is still a member of the European Union (EU). Two other members of the EU are also not currently using the Euro, and they are Denmark and Sweden. This has caused a large debate in the United Kingdom asking whether or not we should opt to join the single European currency. As I said, recently, 12 of the 15 European Union (EU) states adopted the single currency into their domestic economies. However, the UK was one of the four states who chose not to join. ...read more.

It is quite possible that the monetary union will not be sustainable; meaning countries that find themselves to be in difficulty may cancel their membership and re-establish an independent currency. Looking at the moral aspects of the argument, the loss of our own currency would be a loss of our heritage, our independence, and our freedom. Many people do not want to see the face of the Queen banished from the head of our coins to be replaced by something unfamiliar and European. The British nation has a reputation of independence but many people believe the Euro will take that away from us. Another key argument against entry is that if Britain were to join the Euro, our interest rates, currently the tool used for control of inflation by the Bank of England, would be set by the European Central Bank (ECB). Since being given independence the Bank of England has been successful in controlling inflation in this way. Problems could well arise if Britain loses interest rates as a tool for its own economic objectives. So, as you can see, there are two sides to this debate, both providing strong arguments. Having analysed both the pros and cons of membership in the Euro zone, I conclude that at this time it probably is not beneficial to join. ...read more.

The reality is that european monetary union involves much more than just sharing the same notes and coins as other countries in the eurozone. Adoption of the single european currency would mean binding the economic fortunes of the U.K. much more closely to those of continental europe, for better, or for worse. With the expansion of the EU to the east and new members committed to eventually joining the euro, could Britain risk becoming isolated from europe? Or could her abstention prove to be her greatest asset, giving the country the economic autonomy and flexibility required to be competitive in the global marketplace? The arguments on either side are complex and compelling, but if the country's leading business people, economists, financiers, academics and the politicians from all parties cannot agree on this issue, how easy will it be for the undecided amongst the rest of us to make up our minds? There will no doubt be politicians and campaigners from both sides of the debate who will use scare tactics or the dumbing down of the arguments in an attempt to shock or lull us into agreeing with them. But whether the answer should be yes, no or wait-and-see, the aim of this Web site is to build-up links to the key pro and anti-euro organisations as well as many of the best sources of comment and opinion available on the Internet thus allowing everyone who is interested to hear the arguments and make the most informed decision possible ...read more.