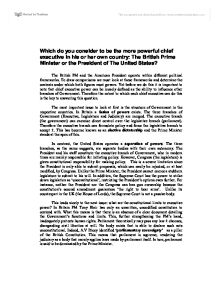 Which do you consider to be the more powerful chief executive in his or her own country: The British Prime Minister or the President of The United States?

Which do you consider to be the more powerful chief executive in his or her own country: The British Prime Minister or the President of The United States? The British PM and the American President operate within different political frameworks. To draw comparisons we must look at these frameworks and determine the contexts under which both figures must govern. Yet before we do this it is important to note that chief executive power can be loosely defined as the ability to influence other branches of Government. Therefore the extent to which each chief executive can do this is the key to answering this question. The most important issue to look at first is the structure of Government in the respective countries. In Britain a fusion of powers exists. The three branches of Government (Executive, Legislature and Judiciary) are merged. The executive branch (the government) can exercise direct control over the legislative branch (parliament). Therefore the executive branch can formulate policy and force the legislative branch to accept it. This has become known as an elective dictatorship and the Prime Minister stands at the apex of this. In contrast, the United States operates a separation of powers. ...read more.

Unburdened by a written constitution, the PM has a formidable array of powers. He is both head of Government and leader of his party, with enormous powers of patronage. For instance, within his own Cabinet, the PM has the power to hire & fire, promote and demote. In addition the PM can determine the size of the Cabinet and which jobs are to be in it. Indeed, Ministries and Cabinet positions can be combined, created or abolished e.g. Tony Blair created the position of Deputy PM for John Prescott in 1997. Richard Crossman proposed the idea of the PM as an all-powerful figure in 1960, which became known as the Presidential model. He argued that the PM could dominate all areas of policy and intervene in any department that he chooses. He continued to say that the Cabinet could be routinely subordinated and even ignored. So much so that it is a 'dignified' part of the constitution such as the Lords and the Monarchy. Indeed from this perspective, Cabinet has been reduced to a mere rubber stamp through the notion of collective responsibility. This states that all Ministers must defend a decision publicly or else resign from Government. ...read more.

For instance, President Kennedy proposed his great society programme in the early sixties but failed to get Congress to pass it. After his assassination, Lyndon Johnson took over and achieved success where Kennedy failed. The reason for this was Johnson's intimidating demeanour and considerable experience in Congress, which allowed him to manipulate the body in a way that Kennedy could not. This proves the importance of different people with different skills. Therefore to conclude neither Chief Executive is without constraints, although the UK Prime Minister is certainly the more powerful within his or her own country. He is not constrained by an assertive judiciary or legislature like his American counterpart. Furthermore the UK doctrine of parliamentary sovereignty means that parliament can make or unmake any law it chooses, a body that is in turn dominated by the Prime Minister. His strength is reinforced further by the lack of a codified constitution, which means that the role of the PM is 'what the office holder chooses and is able to make of it' (Asquith 1908-16). The American President however, enjoys none of these advantages. His power is that of persuasion, which if used effectively, can significantly influence policy direction. The use of the veto is his most powerful weapon since it is difficult to override. 2,085 words. ...read more.