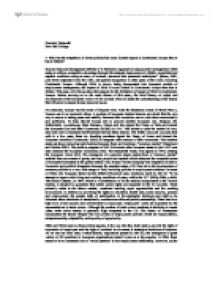 Why has the adaptation of HRM policies had more limited impact in Continental Europe than it has in Britain?

Kaoruko Yamazaki New Hall College 3. Why has the adaptation of HRM policies had more limited impact in Continental Europe than it has in Britain? Human Resource Management (HRM) is "a distinctive approach to employment management which seeks to achieve competitive advantage through the strategic deployment of a highly committed and capable workforce using an array of cultural, structural and personnel techniques." (Storey 2001, p.6) HRM originated from the USA, and gained recognition in other parts of the world, including Continental Europe. Although HRM is slowly being incorporated into European models of employment management, the impact of HRM is more limited in Continental Europe than that in Britain. This essay will discuss about the reasons for the limitation of impact of HRM in Continental Europe. Before moving on to the main theme of this essay, the brief history of origin and development of the European Union will be covered. This will assist the understanding of the factors that influence European human resource issues. For centuries, Europe was the scene of frequent wars. After the disastrous events of World War II, Europe was in an economic chaos. A number of European leaders became convinced that the only way to secure a lasting peace and stability between their countries was to unite them economically and politically. To help rebuild Europe and to prevent another European war, Belgium, the Netherlands, Luxembourg, West Germany, France and Italy signed the Treaty of Paris and formed the European Coal and Steel Community (ECSC) ...read more.

ESM and HRM seem to share similar aspects, in the way that they both seek to provide the right of expression of employees and the right of workers' involvement in strategical decisions of business. As we can see from many worker-friendly regulations passed by the EU, the emergence of great variety of HR practices in European organisations doesn't come as a big surprise. In ESM, there seems to be an increased role of 'social partners' in the employment relationship. However, unlike ESM, HRM, especially the hard version which is more commonly found in the UK, doesn't provide employees with "rights", and regards employee as a resource to achieve numerical flexibility. Because of this contrast between the two concepts of employment protection and imposed flexibility, the US model of HRM did not fit comfortably with the HRM model in Continental Europe. Because HRM is adopted very differently in Europe, this raises the question that HR practices in Europe may be the results of national government support frameworks and not the results of the US-originated model of HRM. Impact of HRM may be limited because legal structure was already there to manage human resource in Europe before the arrival of HRM from the US. "Most HRM policies, in areas such as recruitment and remuneration, retain the imprint of their national context, including legal and institutional specificities." (Human Resource Management in Europe- http://www2.cnrs.fr/en/239.htm) ...read more.

Workplace Employee Relations Survey (WERS98) shows a paradoxical evidence of success of HRM practices in organizations which incorporate collective bargaining. As we can see, adaptation of Anglo-American style of HRM is difficult in Europe, due to pre-existing legal structure, dependency of organization on trade unions, traditional view of employees as 'social partners' which were build upon long history of cultural practices and attitude toward employment management. More we compare the models of HRM in both Europe and the US (thus the UK), more we see that differences between the two models. Are HR practices in Europe the result of the introduction of HRM from America, or of its long history of legal integration to improve the competitiveness of European economy? Nevertheless, there is no single European model being identified. The two models (US and Europe) are so different that it seems reasonable for the employment relation model in Europe to have identity of its own. It is almost like a mixture of hard and soft versions of HRM (although softer version is practiced more frequently in this model). Indirect forms of participation are encouraged through elements of collective bargaining, legal structure and social partnership, as well as direct forms. Humane people-oriented practices are incorporated in the running of organization, although it is limited by the short term management criteria, pressure from global competition and advancing new technology. The need of European companies to survive in the competitive market and interdependency of economies European counties co-exist in this model. ...read more.