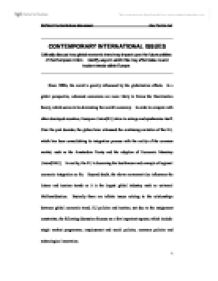 Critically discuss how global economic trend may impact upon the future policies of the European Union. Identify ways in which this may affect leisure and tourism trends within Europe.

CONTEMPORARY INTERNATIONAL ISSUES Critically discuss how global economic trend may impact upon the future policies of the European Union. Identify ways in which this may affect leisure and tourism trends within Europe. Since 1980s, the world is greatly influenced by the globalisation effects. In a global perspective, advanced economies are more likely to favour the liberalisation theory, which seems to be dominating the world's economy. In order to compete with other developed countries, European Union(EU) strive to enlarge and synchronise itself. Over the past decades, the globes have witnessed the continuing evolution of the EU, which has been consolidating its integration process with the reality of the common market, such as the Amsterdam Treaty and the adoption of Economic Monetary Union(EMU). In reality, the EU is becoming the best known and example of regional economic integration so far. Beyond doubt, the above movement also influences the leisure and tourism trends as it is the largest global industry, such as universal McDonaldisation. Basically there are infinite issues relating to the relationships between global economic trend, EU policies and tourism, yet due to the assignment constraints, the following discussion focuses on a few important aspects, which include: single market programme, employment and social policies, common policies and technological innovation. Different authors have dissimilar definitions towards global economic trend. Pilger simply describes global economy as increasing cross-border trades(http://pilger.carlton.com/globalisation/) even as Floyd(2001) defines global economic trend as the freeing up of labour and capital flows. McGiffen(2002) identifies it as changes in telecommunication, transport, in how things are made and the way that people think while Noberg(2003) suggests that the growth of world prosperity is based on capitalism. In fact, the above definitions are all reasonable, but it is apparent that all those explanations are based on the philosophies of 'Liberalism'. In brief, economic liberalism's core belief is to trade, to enter into commercial activity aimed at accumulation of wealth, to invest where and in what one wishes, are basic human rights. ...read more.

At Maastricht, the European Council formed an EMU with the ultimate aim to replace national currencies, 11 Member States adopted Euro, and entrusted monetary policy to European Central Bank(Ongena, and Winkler, 2001). Definitely, there are numerous benefits of single currencies. EU citizens can travel more easily within euro area without the hassle of changing currencies, and with price transparency, travellers can easily analyse value for money (http://europa.eu.int/comm/). In the contrary, foreign exchange business in the tourism industry will experience a loss of income following Euro introduction. For example, Hutton(2002) suggested that the City of London will experience a loss of income from its foreign exchange business and Connor(1998) also projected that this decrease will have consequential multiplier effects on UK aggregate demand. The same also applies to the local foreign exchange firms, such as Thomas Cook. However, UK tends to diversify its economy through introducing more services related jobs. According to the National Statistics, UK GDP growth in 2004 is approximately 0.4%, which is mainly attributed by services sectors, including luxurious leisure and tourism products(http://www.statistics.gov.uk/). In business view, elimination of exchange rate fluctuation provides a more stable environment for international firms to trade, thus companies are better able to plan due to reduced uncertainties. Besides, assorted transaction costs are removed, such as hedging operations that intended to protect companies from adverse exchange rate movements. Additionally there are more opportunities for foreign direct investment with minimal risks; but it can cause leakages and reducing the multiplier effects. Although easier price comparisons enhance competition and lower prices benefit EU tourists, it can also threaten local businesses and small enterprises through vigorous competitions with Trans-national Corporations(TNCs). Positively, WTO proposed that TNCs in leisure and tourism industry or other sectors may demonstrate new technologies, train workers and managers who may later be employed by local firms(http://www.wto.org). On the other hand, local firms may not be able to compete with the superior technological skills. ...read more.

airline and cruise), which forced them to focus more on tailor-made travel packages and niche destination marketing. On one hand, technology enhances company's performances and effectiveness. By contrast, McIntosh et al.(1995) regarded technology as a job killer, since skilled and non-skilled staff may be replaced by innovative technologies. With the high unemployment rate in Europe, technology may further worsen the current situation. Tourism, renowned as a 'people industry', should focus on the human interactions and provide quality services as well as remarkable experiences to the customers instead of relying much on technological service encounters. In brief, EU proposed approach to tourism is through Euro introduction, liberalisation of transport and tourism contribution of employment strategy with innovative technologies. To some extent, these common tourism policies may benefit the community in general. Nevertheless, regional co-operation is the prerequisite of any further community growth. Europe's identity is differentiated by diverse languages, cultures and practices. With the example of British opted out, it is obvious that harmonization is not achieved yet since there is resistance among nations; they have become more cautious and sceptical. The way ahead should focus on promoting cooperation among member states in the tourism arena that will mobilise the available resources of the stakeholders and eliminate the incoherent or contradictory actions. Also, there should be a political recognition of the European tourism as one of the future activities, with an enormous capacity to provide new opportunities to satisfy vital political objectives, such as economic growth, well-being of populations, employment and regional development, with a consequent creation of a more favourable framework for the tourism sector interests. If all members can shift into the same directions with the ultimate aim to improve regional economic growth; national governments are able to accept the fact that their economic growth will slow down; Britain is not favouring the right wing America's cultures and only sneaking benefits from EU; then the targets established in the 1957 Treaty of Rome can be accomplished very soon. ...read more.