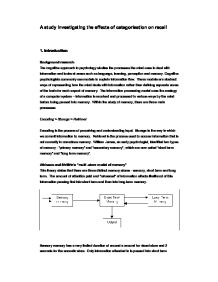 A study investigating the effects of categorisation on recall

A study investigating the effects of categorisation on recall 1. Introduction Background research The cognitive approach to psychology studies the processes the mind uses to deal with information and looks at areas such as language, learning, perception and memory. Cognitive psychologists commonly use models to explain information flow. These models are abstract ways of representing how the mind deals with information rather than defining separate areas of the brain for each aspect of memory. The information processing model uses the analogy of a computer system - information is received and processed in various ways by the mind before being passed into memory. Within the study of memory, there are three main processes: Encoding > Storage > Retrieval Encoding is the process of perceiving and understanding input. Storage is the way in which we commit information to memory. Retrieval is the process used to access information that is not currently in conscious memory. William James, an early psychologist, identified two types of memory - "primary memory" and "secondary memory", which are now called "short term memory" and "long term memory". Atkinson and Shiffrin's "multi-store model of memory" This theory states that there are three distinct memory stores - sensory, short term and long term. The amount of attention paid and "rehearsal" of information affects likelihood of this information passing first into short term and then into long-term memory. Sensory memory has a very limited duration of around a second for visual store and 2 seconds for the acoustic store. Only information attended to is passed into short term memory - we would be swamped by sensory information otherwise. ...read more.

The categorisation of the information gives the participant a cue to aid recall. Tulving and Pearlstone provided the category headings in one of the conditions of their study, which further increased recall. Category headings were not provided on the answer sheet in this study, but participants commented on the groups of words when recalling and it appears that the participants were using the category headings as cues to help recall. Semantic errors were made on the answer sheets such as putting "hifi" instead of "stereo". The participant knew the general form or function of the item they were trying to recall, but used the wrong name to label it. These errors support the Atkinson and Shiffrin model of memory and the theory that long term memory stores information in a semantic format. Generalisation of findings The findings of this study can only be generalised to the target population - in this case the friends and family of the experimenter. This is culture bound, biased and very narrow, so generalisation to people beyond those who took part is likely to be inaccurate as the target population is not representative of the wider population. Application of study to everyday life Using mnemonics to help remember otherwise unconnected information is a practical and effective use of Miller's "chunking" in day to day life. Creating a mnemonic such as "every good boy deserves fudge" to remember the musical notes EGBDF turns a collection of letters into a distinctive, easy to remember sentence. Organising information in a "mind map" or "spider diagram" is another effective way of increasing the quantity of information recalled. These diagrams involve the "chunking" of ideas and information into groups and hierarchies. This has applications in academic and work related situations where large amounts of data need to be recalled. 5. ...read more.