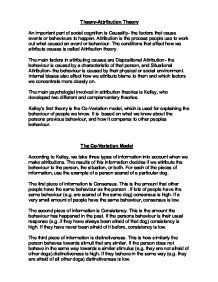 An important part of social cognition is Causality- the factors that cause events or behaviours to happen. Attribution is the process people use to work out what caused an event or behaviour. The conditions that affect how we attribute causes is called Attribution theory.

The main factors in attributing causes are Dispositional Attribution- the behaviour is caused by a characteristic of that person, and Situational Attribution- the behaviour is caused by their physical or social environment. Internal biases also affect how we attribute blame to them and which factors we concentrate more closely on.

The main psychologist involved in attribution theories is Kelley, who developed two different and complementary theories.

Kelley's first theory is the Co-Variation model, which is used for explaining the behaviour of people we know. It is  based on what we know about the persons previous behaviour, and how it compares to other peoples behaviour.

According to Kelley, we take three types of information into account when we make attributions. The results of this information decides if we attribute the behaviour to the person, the situation, or both. For each of the pieces of information, use the example of a person scared of a particular dog.

The last combination is if consensus is low, consistency is low, and  distinctiveness is high(LLH). This behaviour would be attributed to a particular set of circumstances. For example if person C was afraid of  only one dog, and had never been before, and no-one else was afraid of this dog. An explanation of this would be that the dog was usually calm but had recently been aggressive to person C.

This Co-Variation theory has been tested in experiments, and showed that when the three pieces of information are manipulated, people make the attributions predicted by Kelley.

However, despite giving accurate results, there are problems with the theory.

Garland et al showed thatpeople use other information such as personality and context, instead of the information Kelley used. One study found that people would only use the consensus, consistency, and distinctiveness information when no information about the situation or context was available.

The theory is also very cognitively expensive as it takes a lot of effort to process the consensus, consistency and distinctiveness, even when they are available to use. Due to our tendency to act as “cognitive misers” we need a quicker way of processing the information.

An attribution bias is a perception in distortion or judgement about our own or  other peoples behaviour.

It has been suggested that the reason for the FAE is that our “cognitive miser” approach means we ignore situational reasons unless we are directly told about them. This means that once we have thought of a dispositional reason for somebody's behaviour we do not want to make things more complex by adding other reasons.

Although the FAE has been proven in a number of studies, it has been argued that it is not fundamental because there are some situations it does not occur in (e.g. the discounting principle) and that it is more appropriate to call it a bias instead of an error.

The next type of bias is the actor/observer bias. This says that when we observe the behaviour of others, we are more likely to attribute their behaviour to a dispositional factor. (e.g. If we see someone trip over in the street, we would probably say that they are clumsy).

However, when we are the actor (we perform the behaviour) we are more likely to attribute it to a situational factor (e.g. if we tripped over, we would say there was a loose paving stone)

Jones and Nisbett suggested the reason for the bias in attribution is because the actor and observer focus on different information about the behaviour.

There are some situations where the actor/observer bias does not work in this way, and these can be explained by the Self-Serving biases.

For example, the actor/observer bias says that when we are asked to explain why we are successful at something, we will attribute it to a situational factor (e.g. I passed the exam because it was an easy paper). However, people usually explain it using dispositional factors (e.g. I passed the exam because I am good at that subject) This shows that we make dispositional attributions when we are successful, and take responsibility for our success,  which is called the Self-Enhancing bias.

The reverse of this is the Self-Protecting bias, which is when we attribute failure to situational factors instead of dispositional, and deny responsibility for our failures (e.g. I failed the exam because it was unfairly hard)

An extension of these biases is the Self-Handicapping bias. In some cases, we accept responsibility for failure if we know we can change our performance to not fail again. For example people might say “ I failed that exam because I did not prepare for it”

When it is not possible for us to change our performance, we will try to give reasons for failing before the event (e.g. I am going to fail my exam because I did not revise for it) Handicapping ourselves at the start means that we have a way to explain our failure in situational terms afterwards.