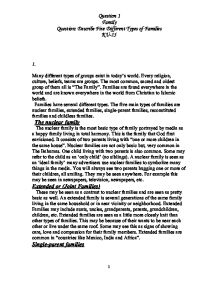 1. Many different types of groups exist in today's world. Every religion, culture, beliefs, teams are groups. The most common, sacred and oldest group of them all is "The Family". Families are found everywhere in the world and are known everywhere in the world from Christian to Islamic beliefs. Families have several different types. The five main types of families are nuclear families, extended families, single-parent families, reconstituted families and childless families. The nuclear family The nuclear family is the most basic type of family portrayed by media as a happy family living in total harmony. This is the family that God first envisioned. It consists of two parents living with "one or more children in the same house". Nuclear families are not only basic but, very common in The Bahamas. ...read more.

This may be because of their wants to be near each other or live under the same roof. Some may see this as signs of showing care, love and compassion for their family members. Extended families are common in "countries like Mexico, India and Africa". Single-parent families Single-parent families have the same definition as their name, one parent living with one or more children. They must basically bring up their children themselves, considering they have no spouse. Many factors can provoke the creation of single-parent families, including a death of a spouse, divorce between the two spouses, etc. It is said that children living with one parent may be a little off balance as opposed to children living with both parents. No father for a son or mother for a daughter may have side effects on the children's morale, behavior and possibly health. ...read more.