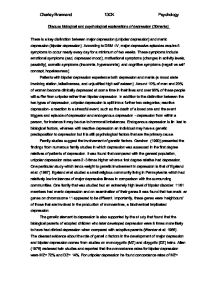 Discuss biological and psychological explanations of depression (30marks) There is a key distinction between major depression (unipolar depression) and manic depression (bipolar depression). According to DSM-IV, major depressive episodes require 5 symptoms to occur nearly every day for a minimum of two weeks. These symptoms include emotional symptoms (sad, depressed mood), motivational symptoms (changes in activity levels, passivity), somatic symptoms (insomnia, hypersomnia), and cognitive symptoms (negative self concept, hopelessness). Patients with bipolar depression experience both depression and mania (a mood state involving elation, talkativeness, and unjustified high self esteem). Around 10% of men and 20% of women become clinically depressed at some time in their lives and over 90% of these people will suffer from unipolar rather than bipolar depression. In addition to the distinction between the two types of depression, unipolar depression is split into a further two categories; reactive depression- a reaction to a stressful event, such as the death of a loved one and the event triggers and episode of depression and endogenous depression- depression from within a person, for instance it may be due to hormonal imbalances. Endogenous depression is linked to biological factors, whereas with reactive depression an individual may have a genetic predisposition to depression but it is still psychological factors that are the primary cause. Family studies suggest the involvement of genetic factors. Gershon (1990) presented the findings from numerous family studies in which depression was assessed in the first degree relatives of patients of depression. ...read more.

This suggests the potential importance of altered levels of serotonin and noradrenaline. However, the drugs rapidly affect neurotransmitter levels, but take much longer to reduce the symptoms of depression or mania. A further weakness of the drug evidence is that the drugs effects do not provide direct evidence of what caused the depression in the first place. MacLeod (1998) called this treatment aetiology fallacy- the mistaken notion that success of a given form of treatment reveals the cause of the disorder. ` There are also psychological accounts of depression. Freud (1917/1950) proposed the psychodynamic approach which argues that depression is created in early childhood. If a child's needs are over or under gratified during the oral stage, fixation occurs and the person may develop a tendency to be excessively dependent on others for self-esteem. Freud conceived depression to be like grief, in that it occurs as a reaction to the loss of an early relationship (Brown & Harris, 1978). However, depression and grief differ in that the depressed person sees himself or herself as worthless. Depression arises from bereavement. After the loss of a loved one by death, or (most commonly for a child) separation or withdrawal of affection, the mourner introjects (identifies with the loved one and incorporates the person into him/herself). Freud argued we often have unconscious negative feelings towards loved ones. Thus, by taking the loved one into us (introjection) we also take our negative feelings towards the loved one into us. ...read more.

He exposed them to electric shocks they could not avoid. After a second test was done where the shocks were avoidable, having been placed initially in an inescapable, stressful situation the dogs failed to try and escape where escape was actually possible. Seligman argued that if things happen to someone too often, irrespective of their own behaviour, the person gives up. Seligman described this as learned helplessness, and argued that it was very similar to the behaviour exhibited by depressed people. Support for this theory lies with Maier & Seligman (1976) who then applied it to humans and found the same results. They subjected people to inescapable noise, shock and insoluble problems. Later, Ps failed to escape from similar situations where escape was possible. However, Maier & Seligman's have not been consistently replicated which is a weakness as it decreases the generalisablity of the results. A further weakness is that although symptoms of learned helplessness in Seligman's dogs and symptoms of depression in humans do appear to be similar, there are problems like the ecological validity of the results as the tests were carried out in a controlled environment, which is not true of today's modern human society. Moreover, another very important problem with this behavioural approach is that later research indicated that what may be more important is not the learned helplessness, but it is the way in which the individual perceives and reacts to the stressful situations i.e. it ignores the cognitions- how we think/feel about situations. Charley Brennand 13CK Psychology ...read more.