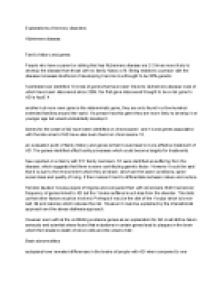 Explanations of disorders of memory PY4

﻿Explanations of memory disorders: Alzheimers disease: Family history and genes: People who have a parent or sibling that has Alzheimers disease are 2-3 times more likely to develop the disease than those with no family history of it. Being related to a person with the disease increases likelihood of developing it and is now thought to be 80% genetic. Scientists have identified 10 kinds of genes that have been linked to Alzheimers disease most of which have been discovered since 2009. the first gene discovered thought to be a risk gene to AD is ApoE 4. another but more rarer gene is the deterministic gene, they are only found in a few hundred extended families around the world. If a person has this gene they are more likely to develop it at younger age but would undoubtedly develop it. Genes for the onset of AD have been identified on chromosome  and 14 and genes associated with the late onset of AD have also been found on chromosome 10. an evaluation point of family history and genes is that it could lead to more effective treatment of AD. The genes identified affect bodily processes which could become targets for treatments. ...read more.

However a problem with these types of experiments is that the findings cant be generalised to humans because of the physical and psychological differences. It is also unethical to harm animals in the way and could be said that these findings could lead to anthropomorphism. Environmental factors may also be the cause of memory impairments and brain damage , it can also be explained by the area lived in, diet, upbringing, exercise etc. Amnesia Repression: its been suggested that emotions have been shown to affect memory recall. Emotions can make it difficult to remember or unforgettable.   Freud believed that forgetting is an unconscious motivated process. He came up with motivated forgetting which involved memories which were too emotionally painful to be forgotten using a defence mechanism such as repression and denial. It was said that in repression painful feelings are at first conscious and then are forgotten, but they are stored in the unconscious from where they can be retrieved. Repression can range from momentary lapses of forgetting the details of a horrific event such as a murder. Amnesia can occur in cases where the person has experienced something extremely painful. ...read more.

However it could be said that they did not want to recall the events so therefore pretended they couldn?t remember. Freud published case studies for his neurotic patients to support his ideas of repression. These have been questioned as inaccurate, however the case studied were unique and one off and can&#39;t be generalised as the study took place on white,middle class neurotic women only. The study could be therefore be said to be Oestocentric and culture bias. The study however did have rich qualitative data. Post traumatic stress disorder is where people re-live traumatic events that have taken place in theory lives. This contradicts repression theory as these people are always remembering it as its not being repressed like Freud says they should. Robinson et al found that the memory of childbirth pain seems to be forgotten or repressed over time. This supports Freud&#39;s theory as child birth can be very traumatic however there are problems with using this evidence to support repression. It is difficult to generalise as the pain of childbirth is more painful and lasts longer than other types of pain. In conclusion all the theories of forgetting have their strengths but some seem to have more credibility and face validity than others. Psychologists however have considered that forgetting can be induced by memory disorders such as amnesia and dementia. ...read more.