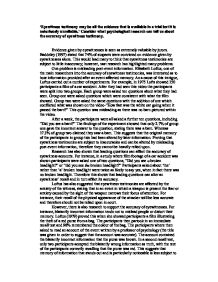 'Eyewitness testimony may be all the evidence that is available in a trial but it is notoriously unreliable.' Consider what psychological research can tell us about the accuracy of eyewitness testimony. Evidence given by eyewitnesses is seen as extremely valuable by jurors. Baddeley (1997) stated that 74% of suspects were convicted on evidence given by eyewitnesses alone. This would lead many to think that eyewitness testimonies are subject to little inaccuracy; however, vast research has highlighted many problems. One problem is misleading post-event information. Elizabeth Loftus, one of the main researchers into the accuracy of eyewitness testimonies, was interested as to how information provided after an event affected memory. As a cause of this intrigue, Loftus carried out a number of experiments. For example, in 1975 Lofts showed 150 participants a film of a car accident. After they had seen this video the participants were split into two groups. Each group were asked ten questions about what they had seen. ...read more.

or "did you see the broken headlight?" Participants asked about 'the' rather than 'a' broken headlight were twice as likely to say yes, when in fact there was no broken headlight. Therefore this shows that leading questions can alter an eyewitness' recall and in turn affect its accuracy. Loftus has also suggested that eyewitness testimonies are affected by the anxiety of the witness, stating that in an event in which a weapon is present the fear or anxiety caused by the sight of the weapon narrows their focus of attention. For instance, their recall of the physical appearance of the attacker will be less accurate and therefore should not be relied upon in court. However, there is also research to support the accuracy of eyewitnesses. For instance, blatantly incorrect information tends not to mislead people or distort their memory. Loftus (1979) proved this when she showed participants a film illustrating the theft of a red purse from a bag. ...read more.

They concluded that eyewitness would be far more accurate in real life as those involved would have experienced a highly stressful situation. This is also supported by Yullie and Cutshall (1986), who interviewed 13 real life witnesses to an armed robbery in Canada. The witnesses were interviewed at the time of the crime and again four months later. Despite the fact some misleading questions were used within the recall tests, their recall was very good on both occasions. This suggests that in real life situations eyewitness testimony can be very reliable, more so than in laboratory based studies. In conclusion, although eyewitness testimonies are subject to inaccuracies I feel that they are not as unreliable as Loftus' studies suggest. This is due to the fact that the participants within her studies were not emotionally affected by the incidents, or put in a highly stressful situation, thus their recall would not have been as accurate as in a real life situation. ...read more.