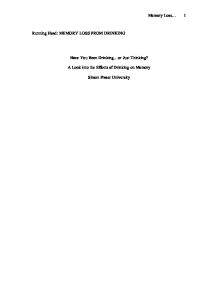 Have You Been Drinking&amp;#133;or Just Thinking? A Look into the Effects of Drinking on Memory.

Running Head: MEMORY LOSS FROM DRINKING Have You Been Drinking...or Just Thinking? A Look into the Effects of Drinking on Memory Simon Fraser University Have You Been Drinking...or Just Thinking? A Look into the Effects of Drinking on Memory Alcohol consumption is an evident epidemic among today's vast society, and overwhelming evidence from past research supports the idea that alcohol intoxication has observable effects on memory (Kirchner & Sayette, 2003; Parker, Birnbaum, & Noble, 1976; Tracy & Bates, 1999). There is a common aspect about memory which is discussed within these experiments. Mainly, all three experimental procedures directly identify two important affected phases of memory, "learning" and "recalling". Research by both Kirchner & Sayette (2003) and Tracy & Bates (1999) respectively studied the combination of effects on "Controlled and Automatic" memory and "Automatic and Effortful" memory, by alcohol. Although the two different experiments used different words to describe the aspects of memory they were studying, it turns out that they were both regarding the same thing. The "controlled" phase from Kirchner & Sayette (2003), along with the "effortful" phase from Tracy & Bates (1999) both refer to the "learning" phase of memory. By the "learning" phase they refer to the slower more effortful processes which are subject to conscious awareness (Kirchner & Sayette, 2003; Tracy & Bates, 1999) for example the practice or studying (learning) of examinable material. The "automatic" phase parallel in both experiments refers oppositely to the effortless, unintentional uncontrolled processes which occur without awareness. ...read more.

The measure of memory efficiency will be recorded, as previously explained, by calculating the scores from administered tests of the study material. In general, from past experimental data (Kirchner & Sayette, 2003; Parker, Birnbaum, & Noble, 1976; Passer & Smith, 2001; Tracy & Bates, 1999) it is expected that as a result of alcohol consumption, performance on the given memory test will suffer. I expect that group one (expect alcohol/receive alcohol) will exhibit the greatest degradation in performance. The group which expects to receive alcohol but does not, should not exhibit any loss in performance since memory, I believe, should not be affected by psychological stimuli. The group which is told they are not receiving alcohol but is administered a dose, will show losses in performance comparable to those in group one. Group four should theoretically have highest average scores for the memory test since past experimental data has shown a negative correlation between alcohol consumption and memory. I wish to have a representative sample for a typical university campus; therefore random sampling from within different university campuses around British Columbia would provide an accurate representation of a university population. Random informational pamphlet dispersion throughout these different campuses would be used to attract a random sample of the population in question. Once gathered, this sample would then by a random process i.e., names out of a hat, be assigned to one of the four independent variable groups. The random assignment attempts to balance many of the differences which may be apparent between individuals in the sample. ...read more.

To obtain a 'proper' sample, the number of surveys distributed needs to be very high. This proves costly. Also, the validity of responses from participators remains questionable. The lack of controlled conditions will limit the causality achievable from such a design. The lack of controlled laboratory conditions where empirical measurements can be made makes causality impossible; however, different relationships between the independent and dependent variables may be uncovered. This design uncovers any relationships which may be evident, so that they then can be recreated in the laboratory setting to be further investigated. Conclusion The experimental design proposed previously, specifically looks at the psychological and chemical effects of alcohol consumption on the "learning" phase of memory. By using two independent variables, effects (psychological or chemical or a combination) of intoxication can be uncovered. With the correlational design, a relationship between alcohol consumption and memory may be uncovered, however due to a lack of controlled environment and conditions this procedure is very susceptible to error and inconsistencies. This specific research takes into account another aspect which may be contribute to the cause of detrimental effects on memory by alcohol. Previous experiment had not included the psychological aspect of influence; the proposed experimental design incorporates this factor to possibly provide more sound evidence that alcohol is responsible for decreases in memory or oppositely provide evidence which may disprove previous findings that alcohol's chemical properties are the cause of decreases in memory. Not only does the proposed design provide important incite on the specific effects on memory, but it may also serve as a window which helps uncover other mysteries of psychological influences affecting other various aspects of our daily lives. ...read more.