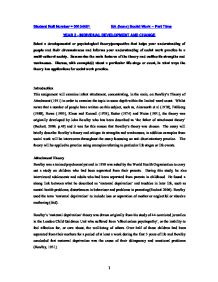 Student Roll Number = 00154481 BA (hons) Social Work - Part Time YEAR 2 - INDIVIDUAL DEVELOPMENT AND CHANGE Select a developmental or psychological theory/perspective that helps your understanding of people and their circumstances and informs your understanding of social work practice in a multi-cultural society. Summarise the main features of the theory and outline its strengths and weaknesses. Discuss, with example(s) about a particular life stage or event, in what ways the theory has applications for social work practice. Introduction This assignment will examine infant attachment, concentrating, in the main, on Bowlby's Theory of Attachment (1951) in order to examine the topic in some depth within the limited word count. Whilst aware that a number of people have written on this subject, such as, Ainsworth et al (1978), Fahlberg (1988), Howe (1995), Klaus and Kennell (1976), Rutter (1974) and Weiss (1991), the theory was originally developed by John Bowlby who has been described as 'the father of attachment theory' (Beckett, 2006. p.49) and it was for this reason that Bowlby's theory was chosen. The essay will briefly describe Bowlby's theory and critique its strengths and weaknesses, in addition examples from social work will be interwoven throughout the essay focussing on anti-discriminatory practice. The theory will be applied to practice using examples referring to particular life stages or life events. ...read more.

He felt that this will be carried through to later life and inform future relationships. It is here where Bowlby puts forward the connection between attachment and the development of individual personalities (Beckett, 2006). Confidence in the availability of an attachment figure, or lack of it, is built up slowly during the years of immaturity - infancy, childhood and adolescence - and.... whatever expectations are developed during those years tend to persist relatively unchanged throughout the rest of life' (Bowlby, 1998a. p245). In order to recognise whether or not an infant has a secure relationship with their caregiver, Bowlby introduced the "Internal Working Model" (Bowlby, 1997). This consists of two sub models, the 'self' and 'other'. It suggests that when a child has a secure attachment with its caregiver, it sees itself as worthy of attention and love. The infant also sees the caregiver as someone who meets their needs. Whereas, if an infant has an insecure attachment, it would see itself as unworthy of attention and the caregiver as unreliable in meeting its needs (ibid). Strengths Bowlby's work was very influential in making a number of positive changes in dealing with the care of children, for example, parents in the 1950's and 1960's were requested not to visit their children in hospital as it was upsetting for the child, however, Bowlby's work regarding the three stages of separation 'Protest, Despair and Denial' demonstrated ...read more.

The twins were taken away and placed in an orphanage, where it was discovered that they demonstrated severe developmental problems including poor locomotion, own unique language of communication between themselves, refusal to be separated, incapable of forming relationships and intellectually immaturity. Over the next four years, their mental capabilities and language skills developed, their intelligence became average and social development improved. The Koluchova twins cast severe doubt on the evidence of 'critical periods' because they recovered and led a normal life. Conclusion In conclusion, Bowlby's work has been very influential on children and care giving. Although it is not without its faults, not least of which is its emphasis on placing the role of carer exclusively on the biological mother to the detriment of equally effective care givers. However, his theory has also influenced child care in many positive ways. Children are now encouraged to have hospital visits by parents, overnight day care has been reduced with children now being preferably placed in foster care with a view to continuity and long term goals. It would appear that Bowlby's work was a product of the time in which he studied, but the importance of early attachment and continuity of care cannot be faulted and his studies have since been developed and refined to fit in with other theorists and ideologists. However, it can still be clearly seen that John Bowlby was indeed the father of Attachment Theory. ...read more.