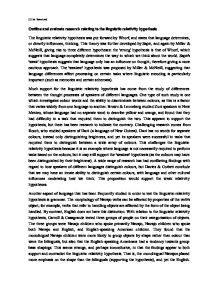 Outline and evaluate research relating to the linguistic relativity hypothesis

& Corbett conclude that we may have an innate ability to distinguish certain colours, with language and other cultural influences moderating how we think. This proposition would support the weak relativity hypotheses. Another aspect of language that has been frequently studied in order to test the linguistic relativity hypothesis is grammar. The morphology of Navajo verbs can be affected by properties of the verb's object; for example, verbs that refer to handling objects are affected by the form of the object being handled. By contrast, English does not have this distinction. With relation to the linguistic relativity hypothesis, Carroll & Casagrande tested three groups of people on their categorisation of objects. The three groups were Navajo children who spoke primarily Navajo, Navajo children who spoke both Navajo and English, and English-speaking American children. They found that the monolingual Navajo children were more likely to group objects by shape rather than colour than were the bilinguals, but also that the English-speaking Americans had a tendency towards group-base shapings. ...read more.

'bigger'), until they have developed the ability to understand absolutes (e.g. 'big'). This view is supported by De Zwart, who found that training children to use more descriptive language did not affect their cognition. For example, although they may be able to use comparative language, they are still not able to realise that the same amount of water in two different-shaped glasses is still the same amount. This indicates that thought precedes language, and therefore supports Piaget's theory. A primary criticism of research into this area of cognitive psychology is that scientific evidence is inconclusive. Many of the conclusions relies on assumptions made after the findings had been gathered, and therefore remain untested and may lack validity. Additionally, the research largely focuses on very specific aspects of language such as colour, grammar and abstraction, which may be a reductionist approach that ignores other factors. This also brings into question whether this research can be used to criticise or support the linguistic relativity hypothesis. Clive Newstead ...read more.

An overall decent essay but with a need for slightly more analysis in order to make better concluding statements. While the essay does cover the question quite well it doesn't go into quite enough detail or judgements. One of the ...

An overall decent essay but with a need for slightly more analysis in order to make better concluding statements. While the essay does cover the question quite well it doesn't go into quite enough detail or judgements. One of the key things to do when writing an essay is read the question. This one asks for outlines of the research and evaluation, and the essay on briefly touches on what the research is and only mildly evaluates. When citing research it is key to include dates as it shows that you have looked at the research and know a bit about it's context (for example when there are lots of studies talking about the same issue it's useful knowing the dates as then you know the order the research came in). The date should come after the name in brackets e.g. Langley (2000). When outlining the research the student has succinctly summarised what happens in the experiment and what the results were but it would be nice to see a few statistics just to raise the quality a little bit more such as the percentage of Navajo children who grouped by shape rather than colour and the same for the bilingual children and American children. These stats would then allow better evaluation as they mean you can see to what extent the theories are supported/not supported. While the brief sentences at the end of each paragraph mildly judge whether the research supports the linguistic relativity hypothesis the conclusion does nothing to synthesise this information and make an overall judgement as to whether it is supported or not. The conclusion is key for making these overarching judgements as it shows an ability to group the information and make an informed decision.

As said before the analysis needs to be a little deeper, showing stats and then comparing them as well as looking at the evidence over all the studies and what they show as a group. Although the foundations are there the student needs to go further than just stating what the studies show but instead by bringing together all the studies they look at to make a decision on the overall fate of the language relativity hypothesis they will gain better marks as they show an ability to condense information from a variety of sources into a final decision. Obviously as they have said in their final paragraph the research may not be able to be used for this, but the student should expand on this and explain that while the evidence of these studies point towards language only mildly affecting our thinking if at all, it is very hard to test as there are multiple confounding variables. Their introduction is strong as it briefly covers what the three main language relativity theories and while dates are needed shows the progression of the theory. This is a good brief way to enter into the essay as while showing what it's going to be talking about it is still succinct.

The language and grammar is okay on the whole although there are some errors. The terminology used (linguistic encoding, schemata) is good as it shows a knowledge of the subject and how to appropriately use it's terminology. The tone is kept formal throughout which is essential and the layout (introduction, main points, conclusion) allows the reader to easily follow the progression of the essay and it's argument (although as said before the conclusion needs slight edits to better show the information discussed).