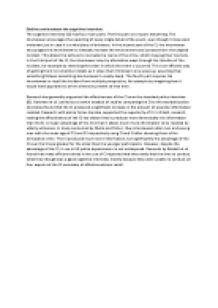 Outline and evaluate the cognitive interview.

﻿Outline and evaluate the cognitive interview. The cognitive interview (CI) has four main parts. The first part is to report everything. The interviewer encourages the reporting of every single detail of the event, even though it may seem irrelevant just in case it is a vital piece of evidence. In the second part of the CI, the interviewer encourages the interviewee to mentally recreate the environment and contacts from the original incident. This allows the witness to recreate the scene of the crime, which may jog their memory. ...read more.

assuming that something follows something else because it usually does). The fourth part requires the interviewee to recall the incident from multiple perspective, for example by imagining how it would have appeared to other witnesses present at that time. Research has generally supported the effectiveness of the CI over the standard police interview (SI). Kohnken et al. carried out a meta- analysis of studies comparing the CI to the standard police interviews found that the CI produced a significant increase in the amount of accurate information recalled. ...read more.

The CI produced much more information, but significantly the advantage of the CI over the SI was greater for the older than the younger participants. However, despite the advantage of the CI, it use in UK police departments in not widespread. Research by Kebbell et al. found that many officers trained in the use of CI reported that they rarely had the time to conduct what they though was a good cognitive interview, mostly because they were unable to conduct all four aspects of the CI necessary of effective witness recall. ...read more.