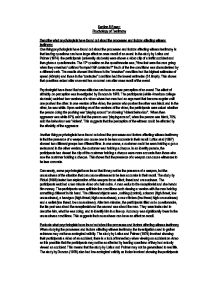 Section B Essay: Psychology of Testimony Describe what psychologists have found out about the processes and factors affecting witness testimony One thing psychologists have found out about the processes and factors affecting witness testimony is that leading questions can have large effect on ones recall of an event. In the study by Loftus and Palmer (1974) the participants (university students) were shown a video clip of a traffic accident and then given a questionnaire. The 17th question on the questionnaire was, "How fast were the cars going when they smashed/ collided/ bumped/ hit/ contacted?" Each of the five conditions was characterised by a different verb. The results showed that those in the "smashed" condition had the highest estimates of speed (40mph) and those in the "contacted" condition had the lowest estimates (31.8mph). This shows that questions asked after an event has occurred can alter ones recall of the event. Psychologist have found that ones attitudes can have on ones perception of an event. The effect of ethnicity on perception was investigated by Duncan in 1976. The participants (white American college students) watched two versions of a video where two men had an argument that became angrier until one pushed the other. In one version of the video, the person who pusher the other was black and in the other, he was white. ...read more.

This suggests that unusualness can have an effect on recall. Evaluate what psychologists have found out about the processes and factors affecting witness testimony When studying the processes and factors affecting witness testimony the investigation used to gather evidence may not have ecological validity. The study by Loftus and Palmer (1974) involved showing their participants a video of an accident, there is a lack of immediacy when viewing an accident on video so it is possible that the participants may not be as affected by leading questions of they had actually viewed an accident. This means that the study by Loftus and Palmer may not be generalised to real life. The study by Duncan (1976) also had low ecological validity as it also involved showing the participants a video of a argument. The participants may not have been as affected by the effect of ethnicity had they seen an accident in real life. This means that they study by Duncan cannot be generalised to incidents in real life. Some psychologists, when studying the processes and factors affecting witness testimony may use an unrepresentative sample. This is true of the study by Loftus and Palmer (1974); the sample consisted of university students. It is likely that university students are not experienced drivers and may generally not have good estimates of speed. ...read more.

or wallet condition (low threat, low unusualness). The participant were unaware of the conditions that they were not in. This reduced the chances of demand characteristics as the participants cannot mould their answerers based on the other possible objects. This ensures the validity of the experiment. You are a police officer and you have been given some clear eyewitness accounts of a suspect. Explain how you would use a identikit or an identity parade to help identify to suspect. Give reasons for your answer. Upon collecting a group of suspects that fit the descriptions given by the eye witnesses the eye witness would then be individually shown images of the possible suspects alone. Showing the participants the images individually would reduce the possibility of social desirability as the participants would not conform to the responses given by the other witness (Asch). The participants would be shown to images of the suspects sequentially as the study by Lindsay and Wells (1985) showed that showing images of suspects sequentially reduces the possibility of false identification. The participants would be given very little encouragement to choose a suspects as, as shown in the study by Wells (2000), even a little bit of encouragement can lead to false identification. This would be a highly effective method of identifying the suspect as the effects of conformity are minimised as is the possibility of false identification. ...read more.