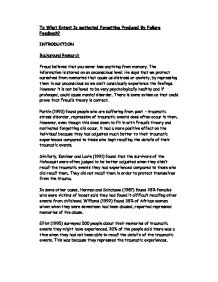 To What Extent Is motivated Forgetting Produced By Failure Feedback?

To What Extent Is motivated Forgetting Produced By Failure Feedback? INTRODUCTION Background Research Freud believes that you never lose anything from memory. The information is stored on an unconscious level. He says that we protect ourselves from memories that cause us distress or anxiety, by repressing them in our unconscious so we don't consciously experience the feelings. However it is not believed to be very psychologically healthy and if prolonged, could cause mental disorder. There is some evidence that could prove that Freud's theory is correct. Parkin (1993) found people who are suffering from post - traumatic stress disorder, repression of traumatic events does often occur in them. However, even though this does seem to fit in with Freud's theory and motivated forgetting did occur, it had a more positive effect on the individual because they had adjusted much better to their traumatic experiences compared to those who kept recalling the details of their traumatic events. Similarly, Kaminer and Lavie (1991) found that the survivors of the Holocaust were often judged to be better adjusted when they didn't recall the traumatic events they had experienced compared to those who did recall them. They did not recall them in order to protect themselves from the trauma. In some other cases, Herman and Schatzow (1987) found 28% females who were victims of incest said they had found it difficult recalling other events from childhood. Williams (1992) found 38% of African women whom when they were seventeen had been abused, reported repressed memories of the abuse. Elliot (1995) surveyed 500 people about their memories of traumatic events they might have experienced. 20% of the people said there was a time when they had not been able to recall the details of the traumatic events. This was because they repressed the traumatic experiences. From this kind of research that has taken place, in theses cases it does seem that motivated forgetting does occur but in a relatively small proportion of the cases. ...read more.

The totals also show the same in which only 229 answers were correct in the test for the 'with scores' condition, compared to the test without scores which was 266 correct answers. In each condition, the range was quite high, as the highest result a participant could get was 20. This shows a wide range of correct recall of state capitals the participants achieved. Also, both conditions had a very similar range, showing the wide range of correct answers was present in both conditions whether the scores were included or not. Additional graphical description of results See attached graphs (A1, A2, A3 and A4) Descriptive Statistics Commentary Graph 1: shows the mean results and compares them with both of the tests that were done. It shows that the group that did the test without the scores scored higher in their tests compared with the group that did the test with the scores. However, it is only slightly higher. Graph 2 (1st distribution graph): shows how people scored in the test that did not include separate scores (D1). It shows that there are more people who scored in the 6-8-category group. Graph 3 (2nd distribution graph): shows distributions of scores in the test that include separate scores (D4). Although there are a number of people who scored in the 6-8 group, there were also a lot of people who scored in the 3-5 ranges. This is possibly why the mean in the 'scores' condition was lower than the 'no scores' condition. Both graphs are close to normal distribution, as they both produced a 'bell-like' shape. Relationship of results to hypothesis The alternate hypothesis predicts that the group with scores on their test recall fewer American state capitals than the group without scores. The results show that the group that did the test with no scores scored higher compared with the group that did have scores. ...read more.

This is because the sampling technique that was used was an opportunity sample. This does not represent the community in general and their individual behaviours. An alternative sampling technique would be random or stratified. Random samples will probably be unbiased and representative but not completely. A stratified sample would be better for ensuring the characteristics displayed in the sample will be more directly representative of the way in which they occur in the population. The downside is that a stratified sample is more complicated much more time consuming. Application of Study to Everyday Life Eyewitness testimony - might be a traumatic experience so therefore motivated forgetting may occur. When memories need to be recalled it may be difficult recalling it. According to the alternative hypothesis, the results suggest that motivated forgetting does occur and any information associated with anxiety will be repressed. This means in education, or any place of learning, if people want to learn, an environment should be created that's relaxed and does not produce anxiety. If the environment does produce anxiety there will be repression of information so therefore motivated forgetting will occur. This would be happening all the time and cannot be controlled every single time. There is also the problem of false memory syndrome. This is something that has been developed from therapy. People reported recovered memories about things that have happened to them that have been traumatic such as child abuse. In some cases the events reflected didn't really happen so therefore are false. This suggests you can generate false memories so psychologists have begun to question the validity of recalled memories. Certain things that the therapist says generate the false memories. The individual takes this on board and recalls it as if it was a memory of an event that actually happened. The evidence that suggests that motivated forgetting does occur conflicts with false memory syndrome. Motivated forgetting theory says that recovered memories can often be true but false memory syndrome says that recovered memories are distorted or false. ...read more.