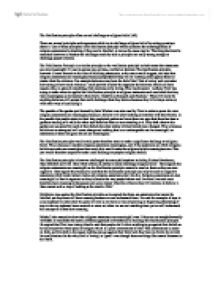 The falsification principle offers no real challenge to religious belief. (45) There are several principles and arguments which try to challenge religious belief by raising questions about it. One of these principles is the falsification principle which questions the meaningfulness of religious statements by checking if they can be falsified, or not as the cases may be. The thing that must be examined however is whether the challenges made by such a principle are really strong enough to challenge people's beliefs. The Falsification Principle is a similar principle to the verification principle as both states that statements are only meaningful if it can be proven true or false, verified or falsified. The falsification principle however if more focused on the idea of falsifying statements, as the name would suggest, and says that religious statements are meaningless because people(believers) will let nothing count against them no matter what the evidence. For example believers may have the belief that 'God is loving' and no matter how strong or how much evidence I could provide to show the opposite the believers would still have reasons why, in spite of everything, God continues to be loving. ...read more.

Hare which affects its ability to really challenge religious belief. Hare argued that religious statements are meaningful as the falsification principle cannot be used on them as they are non-cognitive. Hare argued this because he said that the falsification principle can only be used on cognitive statements which make factual claims and religious statements don't do this. Religious statements are also meaningful in Hare's argument as they influence the way people behave and live their lives and must therefore have meaning to that person and so no matter what the evidence they will continue to believe it. Hare named such a way of looking at the world a 'blik'. Swinburne was against the falsification principle as he argued that there are statements that cannot be falsified yet they must still have meaning because we can understand them. He used the example of toys in a toy cupboard in order show his point of view as we have no way of proving or disproving (falsifying) if toys in the toy cupboard move around or come out when we are not watching them yet we still understand the concept so it does have meaning. ...read more.

Tillich is challenged by Paul Edwards who says that religious language is not symbolic because we have no way of checking to see if the concepts are true or remotely accurate. Edwards argued that it was inappropriate to describe religious language as symbolic as there is no factual basis behind the symbol and it can therefore lead to misinterpretation or misunderstanding. Edwards therefore strengthens Flews argument that religious statements are meaningless and adds to his challenge to religious belief. Overall it would therefore seem that the falsification principle does make some key points about the meaningfulness of religious language which could rock many peoples religious beliefs but the criticism put forward by people such as Hare, Mitchell, and Swinburne as well as Tillich's view of religious language as symbolic make it much less of a real challenge. However when you take into account the criticism of Tillich as well it makes his view a lesser threat to taking away the challenge put forward by the falsification principle if not totally dismissing it, which would suggest it rests on the strengths of the criticism of the falsification principle to decide if it is a real challenge to religious beliefs or not. ...read more.