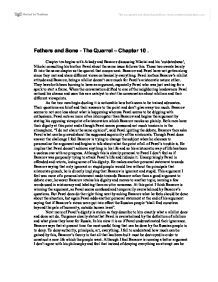 Fathers and Sons - The Quarrel - Chapter 10 . Chapter ten begins with Arkady and Bazarov discussing Nikolai and his 'outdatedness', Nikolai consulting his brother Pavel about the same issue follows this. These two events barely fit into the same chapter as the quarrel that occurs next. Bazarov and Pavel have not gotten along since they met and share different views on basically everything. Pavel loathes Bazarov's nihilist attitude and Bazarov, being a nihilist doesn't care much for Pavel's aristocratic nature either. They have both been burning to have an argument, especially Pavel who was just waiting for a spark to start a flame. When the conversation drifted to one of the neighboring landowners Pavel noticed his chance and uses this as a catalyst to start the conversation about nihilism and their different viewpoints. As the two men begin dueling it is noticeable how both seem to be trained advocates. Their questions are brief and their answers to the point and don't give away too much. Bazarov seems to not care less about what is happening whereas Pavel seems to be dripping with enthusiasm. Pavel acts as more of an interrogator than Bazarov and begins the argument by stating his opposing viewpoint of aristocratism which Bazarov mocks so plainly. Both men have their dignity at this point and although Pavel seems pressured not much tension is in the atmosphere. ...read more.

To deny authority, principals, art, everything. I fail to understand how much can be gained by this, Bazarov's theory is that all that has been built must be destroyed in order to construct a new life which the people want. Although I feel Bazarov is running a better argument I don't agree with his philosophy and feel that instead of denying everything an attempt can be made at just trying to change what has been built instead of destroying it and reconstructing it from scratch. Pavel continues to lose his temper and his arguments get worse as he loses his dignity and begins acting childlike. To reply to Bazarov and Arkady's description of the Russian people he says "No, no! I can't believe that you young men really know the Russian people, that you represent their needs and aspirations! No, the Russian people are not what you imagine them to be. They hold tradition sacred, they are a patriarchal people, they cannot live without faith . . ." This sentence with its abundance of 'no's' sounds very childlike and most of it seems as if Pavel is trying to tell himself rather than the others that what they say is not true. Bazarov still contains full dignity and as adultly as possible agrees to ease Pavel, but he still refuses to admit if he is wrong. ...read more.

Although slightly irrelevant Bazarov's analogy to a single candle burning down the whole of Moscow, I feel was a strong argument. Pavel seems to lose his dignity along with the argument as he again starts acting restless and angered. Pavel then loses all dignity when he starts to be sarcastic saying "Bravo, bravo!" and trying to make what Bazarov is saying foolish by pretending to acknowledge it. His loss of dignity is made clear with Bazarov's statement "You have departed from your praiseworthy sense of personal dignity" and with this Bazarov chooses to close the argument, but not without his closing sentence in which he asks Pavel to think of institutions where the aristocracy has had an outcome of no problems. Pavel attempts to name a few but is proven wrong by Bazarov for his attempts. Bazarov once again asks Pavel to take his time and think about it; with this he takes his leave and the discussion comes to an end. Bazarov is clearly a powerful advocate who can maintain his dignity even when he is criticized and although many people oppose his views he has managed to keep his views alive. Pavel, although a good attempt would make a weaker advocate, his weaknesses lie in his quick temper. Maintaining your cool is very important and Bazarov proved that, he left the argument with all his dignity and my vote as the winner whereas Pavel was left tongue-tied and labeled as the loser. ...read more.