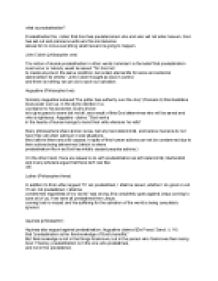 ﻿what is predestination? Predestination the  notion that God has predetermined who and who will not enter heaven. God has set out and planned events and his omniscience allows him to know everything what has and is going to happen. John Calvin (philosopher one) The notion of double predestination in other words &#39;calvinism&#39; is the belief that predestination must occur or nobody would be saved: "for God not to create anyone in the same condition, but ordain eternal life for some and enternal dammantion for others." ...read more.

Augustine  claims: "God works in the hearts of human beings to bend their wills wherever he wills" Many philosophers share similar views, namely hard determinist, and believe humans do not have free will when acting in moral situations, they believe there are prior causes. In spite of this human actions can not be condemned due to their actions being determined (which is where predestination fits in as God has initally caused peoples actions.) On the other hand, there are issues to do with predestination as soft determinist, liberteratist and many scholars argue that there isn&#39;t real free will. ...read more.

Aquinas (philosopher) Aquinas also argued against predestination, Augustine claimed (De Praed. Sanct. ii, 14) that "predestination is the foreknowledge of God&#39;s benefits." But foreknowledge is not in the things foreknown, but in the person who foreknows them being God. Thereby, predestination is in the one who predestines, and not in the predestined. It states in Romans 8: "For those God foreknew he also predestined to be conformed to the likeness of his son" illustrate Gods ominscients and ominpotence as he knows all which will happen, one would assume presdestination but we can not comphrehend time the way God does, as humans we see time as point A to point B, but God is immutable and has no beginning or end. ...read more.