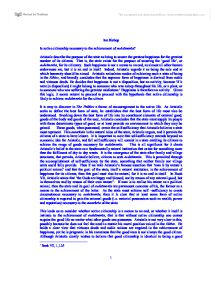 Is active citizenship necessary to the achievement of eudaimonia?

Ian Bishop Is active citizenship necessary to the achievement of eudaimonia? Aristotle describe the purpose of the state as being to secure the greatest happiness for the greatest number of its citizens. That is, the state exists for the purpose of securing the 'good life', or eudaimonia, for its citizenry. Such happiness is not a means to an end, as almost all other human endeavours are, but it is an end in itself. Indeed, Aristotle regards it as being the sole end at which humanity should be aimed. Aristotle articulates modes of achieving such a state of being in the Ethics, and broadly concludes that the supreme form of happiness is derived from noble and virtuous deeds. He decides that happiness is not a disposition, but an activity, because 'if it were [a disposition] it might belong to someone who was asleep throughout his life, or a plant, or to someone who was suffering the greatest misfortune.' Happiness is therefore an activity. Given this logic, it seems natural to proceed to proceed with the hypothesis that active citizenship is likely to achieve eudaimonia for the citizen. It is easy to discover in The Politics a theme of encouragement to the active life. ...read more.

Surely this criteria for happiness, highness of mind, is very exclusive indeed, as the majority of people cannot possibly have the most highly cultivated mind. This leads us to consider the nature of Aristotle's view of happiness. He does not have a modern, egalitarian view of happiness, and clearly believes that many groups are excluded from the achievement of eudaimonia. Slaves and non-citizens are both groups who cannot be happy. Equally, we must consider what Aristotle means by 'active citizenship'. A modern understanding of the phrase is of little use to us, since we associate active citizenship with democratic structures. Aristotle regarded citizens as those with a right to participate in the judicial and decision making structures of the state. Again, this excludes a great many people, and modern preconceptions of equality hinder an understanding of Aristotle's point. Throughout The Politics Aristotle expresses his views against equality and argues for the exclusivity of citizenship. For Aristotle, the matter of how to govern well is to act in the interests of the citizens, though this may not accord with their wishes. Aristotle has no modern conceptions of representation of the popular view, and regard rulers as holding authority as a result of their collective expertise and not on their forming a majority of the citizenry. ...read more.

Aristotle took the term to mean a form of life that wants for nothing, and he clearly knew that for many people this was impossible. Aristotle's interest lay rather in the creation of a state which could allow the development of eudaimonia for its citizens, another term with a more specific and limited meaning in Aristotle's day. Within Aristotle's definitions of citizenship, activity and eudaimonia we can say that Aristotle believes that both on ethical and practical grounds, a good life is necessary and desirable. One achieves happiness through virtuous and good deeds, and the state is built upon activity. The two points of view, ethical and practical, are easily reconciled by Aristotle, although he never gives way to na�vet� in either. The naturalness of politics and the state make political activity particularly desirable, as it is to bring us closer to the gods to act in our nature. Arguably, the principal thrust of The Politics is to illustrate the naturalness of politics, and the immortal phrase 'man is by nature a political animal' suggests that Aristotle achieved his aim. Within this argument, it is wholly logical that through citizenship, that is, participation in the state, we can best achieve our truest happiness. 2,100 1 Book VII, 1, l.25 2 Book VII 3 l.33 ?? ?? ?? ?? 2 1 ...read more.