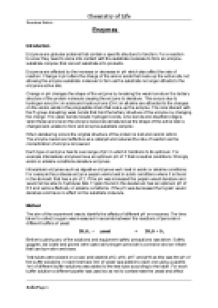 Buffer enzymes. The aim of the experiment was to identify the affects of different pH on enzymes.

﻿Chemistry of Life ________________ Roseleen Rahim Enzymes Introduction Enzymes are globular proteins that contain a specific structure to function. For a reaction to occur they need to come into contact with the substrate molecule to form an enzyme-substrate complex that convert substrate into products. Enzymes are affected by the increase or decrease in pH which also affect the rate of reaction. Change in pH alters the charge of the amino acids that make up the active site not allowing the enzyme-substrate molecule to form as the substrate no longer attracts to the enzymes active site. Change in pH changes the shape of the enzyme by breaking the weak bonds on the tertiary structure of the protein molecule causing the enzyme to denature. This occurs due to hydrogen ions (H+) in acids and hydroxyl ions (OH-) in alkaline are attracted to the charges on the amino acids in the polypeptide chain that make up the enzyme. The ions interact with the R-group disrupting weak bonds that hold the tertiary structure of the enzyme by changing the charge. The weak bonds include hydrogen bonds, ionic bonds and disulfide bridges, when these are broken the enzyme becomes denatured as the shape of the active site is changed and unable to form and enzyme-substrate complex. ...read more.

Once the test tubes were ready the rest of the apparatus was prepared in the standard format shown below. A large jug was filled with cold water and a 30ml gas syringe was placed inside and filled with water to the top. The tap on the gas syringe was fastened with a clip to prevent water from escaping. One end of the oxygen collecting tube was placed securely beneath the gas syringe in the water. The other end of the gas collecting tube was connected to a bung. The bung also had a needle all the way through that connected to a syringe. The bung attached to the test tube and prevented gas escaping through the top of the test tube and allowed it to pass through the gas collecting tube. The syringe was filled with 1ml of peroxide and then carefully screwed onto to the needle. A stopwatch was used and started as soon as the peroxide was forced out of the syringe and into the different buffers of yeast. The oxygen formed from the reaction travels through the gas collecting tube and collected in the gas syringe. When 10ml of gas was collected the stopwatch was stopped and the time in seconds was recorded in a table prepared before hand. ...read more.

When the peroxide was being pushed out of the syringe it was important to screw the syringe in compactly as otherwise not all the peroxide would be used in the reaction making the results inaccurate. In this experiment the tap on the gas syringe had to be firmly closed by the hands to prevent water from escaping, which was difficult as the pressure used on the tap was unintentionally loosened as times or the tap was held too firmly. To overcome these problems the next time the experiment is done more experience would be acquired so it would be done more efficiently and repeated twice more to gain reliable results. When repeating the experiment a clip will be used for the tap on the gas syringe. Instead of preparing all the test tubes at once they would be prepared individually before starting the reaction, so that the buffer would spend a similar amount of time in the yeast to other buffer solutions. Experiment was done starting with pH2 to pH9 as it was predicted that the enzyme activity would be low during the start and gradually increase to pH7 before starting to decrease. However instead of decreasing the enzyme activity was still gradually increasing. This order of testing made it easier to covert the data from the table into a graph. ________________ BufferPage ...read more.