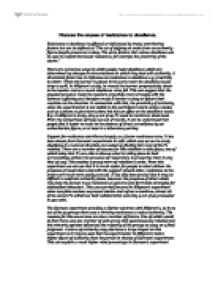 Resistance to obedience is affected or influenced by many contributing factors but can be defined as “The act of defying an order from an authority figure despite pressures to obey. The same factors that reduce obedience can be used to explain increased resistance, for example the proximity of the victim.”

There are numerous ways in which people resist obedience which are determined by changes in circumstances in which they deal with authority. A situational factor has an influence on resistance to obedience e.g. proximity to victim. When the learner is placed in the same room the obedience levels drop to 40%. In Milgram’s study, he moved the learner progressively closer to the teacher and as a result obedience rates fell. This can suggest that the physical presence made the teachers empathise more strongly with the learners suffering and therefore made it harder to deny or ignore their reactions to the situation. In connection

The Gamson experiment provides a distinct contrast with Milgram’s, as in 29 out of the 33 groups there was a thriving resistance to unjust authority. The reasons for this occurrence are due a number of factors. One of which would be that there was one member of each group that spontaneously rebelled and this minority opinion influenced the majority of the groups to sway on a final judgment. A status of authority may also have a large impact on this experiment as it may be seen that the experimenter in Milgram’s had a higher figure of authority than the person in charge of Gamson’s experiment. This can explain a much higher rebel percentage in Gamson’s experiment.

Individual factors that contribute to resistance are things such as a P’s significant experience or special expertise to a situation of a similar state.

A P’s occupation can also be linked with this as a person of a higher status job would be likely to be more rebellious than a person of a lower status. Educated P’s are usually less obedient than those who are not. Students are also more obedient than the general population. A strong sense of moral responsibility will cause a different reaction e.g. the minister of religion in Milgram’s experiment. A much more confidant P would more easily stand against authority or would be used to being in a position of power. These individual factors have been recognized from transcripts of interviews with Milgrams P’s and from cross-cultural replications.

In conclusion, with support, confidence, experience, expertise and other varying aspects that reduce an amount of applied pressure to an individual, a change in behaviour can be noticed when under strain from a figure of authority. Having a clear sense of ones own moral values and ones rights, can contribute to helping P’s resist to obedience.