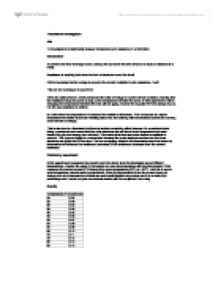 Investigate the relationship between temperature and resistance in a thermistor.

To investigate the relationship between temperature and resistance in a thermistor.

A current is the flow of charge round a circuit, this can be in the form of ions in a liquid or electrons in a metal.

Resistance is anything that slows the flow of electrons round the circuit.

This can be re-arranged to say R=V/I.

Ohms law states that in a metal component the ratio of voltage to current remain constant, meaning that the resistance stays the same as long as the temperature remains the same. In this experiment I will be changing the temperature therefore this rule will not apply, however the equation R=V/I is always true as it is the way resistance is defined.

In a wire when the temperature is increased the resistance increases. This is because at a higher temperature the lattice atoms are vibrating faster and are colliding with the electrical current and slowing down the flow of charge. 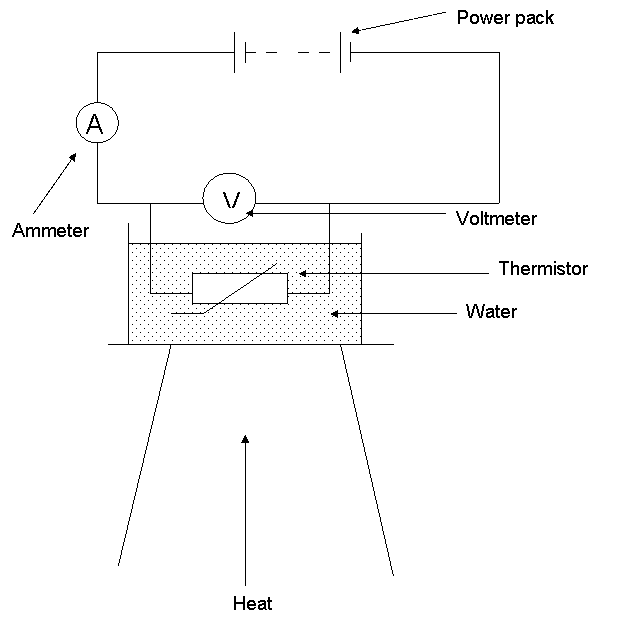 0C and see if the resistance would start to increase again after the thermistors atoms have lost all their outer electrons and the lattice atoms continue to move faster slowing down the flow of current. I could not use water to do this as water can not be heated beyond 1000C, I would have to use a liquid with a higher boiling point such as oil. For this experiment I would set up the equipment in the same way but use oil instead of water and continue beyond 1000C. I could also investigate whether the length of a wire had an effect on the resistance of the circuit there would be more lattice atoms and may be a higher resistance.