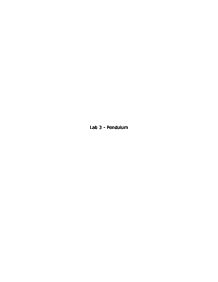 Lab Report - In this lab report, it will describe the weight of the bob, the displacement and the length of the string of how each factor affect the period of a pendulum.

The pendulum consists of a string that has something hanging from the end. When the pendulum is pulled back and release from a certain displacement, the pendulum will freely swing down to the opposite side by force of the gravity and back. The length of the pendulum is measured by the distance from the point where the string is attached and down to the top of the bob. The period is the time it takes for the string to complete a number of required cycles. The cycle is the motion of the bob from the start point to the extreme opposite and back. The bob is the mass of the end of the string. The displacement is the distance or angle the bob is pulled to the right. In this lab report, it will describe the weight of the bob, the displacement and the length of the string of how each factor affect the period of a pendulum. This includes the hypothesis, methods, control variable, results, data table and the conclusion for each experiment.

Lab 1 Part 2 – To determine how the displacement affect the period of a pendulum.