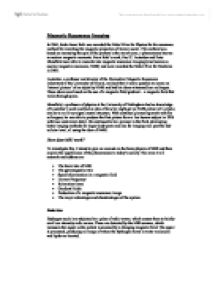 Magnetic Resonance Imaging In 1944, Isidor Isaac Rabi was awarded the Nobel Prize for Physics for his resonance method for recording the magnetic properties of atomic nuclei. This method was based on measuring the spin of the protons in the atom's core, a phenomenon known as nuclear magnetic moments. From Rabi's work, Paul C. Lauterbur and Peter Mansfield were able to research into magnetic resonance imaging (also known as nuclear magnetic resonance, NMR) and were awarded the Nobel Prize for Medicine in 2003. Lauterbur, a professor and director of the Biomedical Magnetic Resonance Laboratory at the University of Illinois, realised that it was to possible to create an 'internal picture' of an object by NMR and had his ideas witnessed by a colleague. These ideas were based on the use of a magnetic field gradient - a magnetic field that varies through space. Mansfield, a professor of physics at the University of Nottingham had no knowledge of Lauterbur's work and had an idea of how he might get an NMR picture of a crystal, similar to an X-ray signal crystal structure. With continual pioneering work with his colleagues, he was able to produce the first picture from a live human subject in 1976 with true anatomical detail. He continued to be a pioneer in the field, developing better imaging methods for larger body parts and also for imaging well past the sub-cellular level, all using the idea of NMR. How does MRI work? To investigate this, I intend to give an account on the basic physics of MRI and then explain the significance of the phenomenon to today's society. The areas I will research and address are: * The basic idea of MRI * The gyromagnetic ratio * Speed of precession in a magnetic field * Larmor Frequency * Relaxation times * Gradient Fields * Production of a magnetic resonance image * The major advantages and disadvantages of the system. ...read more.

as longitudinal magnetization is completely restored. This means that another radio-frequency pulse must be applied for the signal to be produced again. Initially a 90� pulse can be sent to tilt the net magnetization 90� in the direction transverse to the external magnetic field allowing a signal to be produced. After a certain time when most of the transversal magnetization has disappeared, another 90� pulse can be sent causing the same effect. The time between these pulses is known as the time to repeat, TR and is important in distinguishing between tissues of different types, hence increasing the resolution of the image (the resolution being the smallest distance between 2 objects which can be easily distinguishable). The strength of the signal obtained after sending the second 90� pulse, depends on the amount of longitudinal magnetization that we start with as this is tilted to become the transversal magnetization. If a relatively long time is elapsed between sending the second RF pulse, then the longitudinal magnetization will have recovered totally and the signal after the second pulse will thus be the same as the one after the first pulse. Since different tissues have different longitudinal relaxation times, T1 values, using a short TR would mean that tissues with a short T1 would have more longitudinal magnetization than those with a longer T1 by this time. This results in more longitudinal magnetization being tilted by the next 90� RF pulse and a stronger signal produced. This difference in signal intensity allows different tissues to be differentiated between. Images produced by using a short TR (typically less than 0.5 seconds) to make the differences in T1 between tissues pronounced, are known as T1-weighted images. T1 is not the only parameter which signal intensity depends on. When a long time has elapsed between one pulse and the next (long TR, more than 1.5 seconds), there may still be a difference in the intensities of the signals produced. ...read more.

This frequency is related to the strength of the external magnetic field by a nuclei-specific constant, known as the gyromagnetic ratio as shown by the Larmor equation. When a radio-frequency pulse is applied at the Larmor frequency, resonance occurs and the protons absorb energy, flipping to a higher energy state. They also precess in phase producing a net transversal magnetization. As this magnetic vector is constantly moving a changing direction, it induces a current in the receiver coil as stated by Faraday's law of induction. Once the pulse is switched off, the transversal magnetization decays and longitudinal magnetization recovers. The time constants representing the recovery and decay of the respective magnetization components are known as the T1 and T2 relaxation times. The times vary for different tissues. A pulse sequence of radio waves can be developed where the times between sending one pulse and the next known as TR (time to repeat) and TE (time to echo) affect the amount of T1 and T2 weighting. This also affects how the final image looks. Gradient fields can be applied producing a magnetic field of varying strength across a slice. This causes protons to precess at different frequencies and hence the signal produced will be at different frequencies. Another gradient field can be applied after an RF pulse has been sent in, which again causes protons to precess at different frequencies. Once it is switched off, the protons all precess at the same frequency but are out of phase. The information from these different signals can be processed using a fourier transformation to form the final image. Magnetic resonance imaging has been proved to be a revolutionary method of imaging the human body. It allows images to be taken from different planes enabling tumours for example to be seen more easily. It is however, expensive to buy and run but for the many people who can benefit greatly from the system, it is seen as a necessary expense. ...read more.