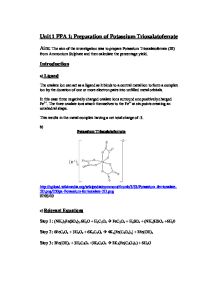 Unit 1 PPA 1: Preparation of Potassium Trioxalatoferrate Aim: The aim of the investigation was to prepare Potassium Trioxalatoferrate (III) from Ammonium Sulphate and then calculate the percentage yield. Introduction a) Ligand The oxalate ion can act as a ligand as it binds to a central metal ion to form a complex ion by the donation of one or more electron pairs into unfilled metal orbitals. In this case three negatively charged oxalate ions surround one positively charged Fe3+. The three oxalate ions attach themselves to the Fe3+ at six points creating an octahedral shape. This results in the metal complex having a net total charge of -3. b) Potassium Trioxalatoferrate http://upload.wikimedia.org/wikipedia/commons/thumb/3/33/Potassium-ferrioxalate-2D.png/250px-Potassium-ferrioxalate-2D.png 07/03/10 c) Relevant Equations Step 1: (NH4)2Fe(SO4)2.6H2O + H2C2O4 --> FeC2O4 + H2SO4 + (NH4)HSO4 +6H20 Step 2: 6FeC2O4 + 3H2O2 + 6K2C2O4 --> 4K3[Fe(C2O4)3] + 2Fe(OH)3 Step 3: 2Fe(OH)3 + 3H2C2O4 +3K2C2O4 --> 2K3(Fe(C2O4)3) ...read more.

ions to iron (III) ions. Procedure * A 100 cm3 glass beaker was weighed and approximately 5g hydrated ammonium iron(II) sulphate was added. The beaker and its contents were then reweighed. * Approximately 15 cm3 and 1 cm3 sulphuric acid were added to the ammonium iron(II) sulphate. The mixture was then warmed to dissolve the solid * After the ammonium iron(II) sulphate was dissolved 25 cm3 oxalic acid was added. (NH4)2Fe(SO4)2.6H2O + H2C2O4 --> FeC2O4 + H2SO4 + (NH4)HSO4 +6H20 Green --> Yellow * The beaker was then placed on a hot plate and slowly heated and stirred until it boiled. * The beaker was removed from the heat in order to allow the precipitate (Iron (II) Oxalate) to form at the bottom of the beaker. * The liquid was then decanted and 50 cm3 of deionised water was added to the remaining precipitate. ...read more.