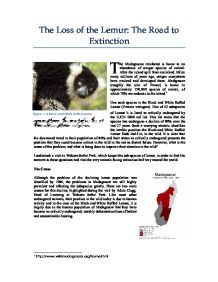 The Loss of the Lemur: The Road to Extinction

The Loss of the Lemur: The Road to Extinction T he Madagascan rainforest is home to an abundance of unique species of animal. After the island split from mainland Africa many millions of years ago, unique ecosystems have evolved and developed there. Madagascar (roughly the size of France) is home to approximately 250,000 species of animal, of which 70% are endemic to the island.1 One such species is the Black and White Ruffed Lemur (Varecia variegata). One of 42 subspecies of Lemur it is listed as critically endangered by the IUCN 2008 red list. This list states that the species has undergone a decline of 80% over the last 27 years. Such a worrying statistic identifies the terrible position the Black-and-White Ruffed Lemur finds itself in, in the wild. It is clear that the downward trend in their population of 80% and their status as critically endangered presents the problem that they could become extinct in the wild in the not so distant future. However, what is the cause of this problem, and what is being done to improve their situation in the wild? ...read more.

This has many benefits, not only does it help to conserve the lemurs but also other types of animals and also species of plants that would have been destroyed by the slash-and-burn agricultural technique. Ex-Situ conservation Captive breeding programs have been instigated around the world and as a result, there is quite a healthy population of black-and-white ruffed lemurs in captivity and therefore there is a great genetic variety. Cultivating and maintaining genetic variety is one of the most important parts of ex-situ conservation. It is important that zoos ensure that their breeding programs are sensible in making sure there is genetic variety. A program called SPARKS (single population animal record keeping system) is used by zoos to analyse genetic variety and populations of captive animals. Woburn Safari Park has kept black-and-white rugged lemurs since 1966 and has used captive breeding programs to ensure a healthy population of lemurs in the zoo. They are not currently engaging in a breeding program as they already have a full group. This means they have a restrictive gene pool and must take a break from breeding for a few years in which time they will take in another female. ...read more.

An egg was collected from one of the Zoo's Black Rhinoceros females - Rocket and fertilised with sperm from a Black Rhino male to create an embryo.5 This was an amazing advance in terms of conservation. If this can be done with a black rhino, it can be assumed that such a technique could also be used to help lemurs too. Not only can IVF help to overcome fertility issues but also it will allow other benefits, such as those stated by Dr. Thomas Hildebrandt. "Importantly it will now enable us to save the genome of critically endangered animals, either Zoo-based or in the wild. We can then transport these genes anywhere and insert them back into the population at any time, with the suitable techniques, therefore giving us a real chance to try and reverse extinction rates for some of the most endangered animals on our planet."6 With new techniques being researched and increased education, the future could hold many surprises for the lemur. One must not however forget the frightening fact that over the last 27 years their population has reduced by 80%. The struggle against extinction for the black-and-white ruffed lemur remains constant. 1 http://www.wildmadagascar.org/home.html 2 http://www.usaid.gov/stories/madagascar/ss_mdg_slash.html 3 http://earthtrends.wri.org/povlinks/country/madagascar.php 4 Sarah Joy, Animal Keeper at Woburn Safari Park 5 http://www.zoo.nsw.gov.au/tcsa/media/media-releases/zoo%27s-research-delivers-world%27s-first-ivf-black-rhino-embryo.aspx 6 Dr. Thomas Hildebrandt ?? ?? ?? ?? ...read more.

A very good account of issues facing the survival of this lemur subspecies. The author has used some interesting information sources and a good level of detail is included. A few careless factual errors are present however.