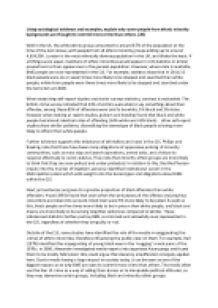 Using sociological evidence and examples, explain why some people from ethnic minority backgrounds are thought to commit more crime than others.

ï»¿Using sociological evidence and examples, explain why some people from ethnic minority backgrounds are thought to commit more crime than others. (20) Within the UK, the white ethnic group amounted to around 87% of the population at the time of the last census, with people from all ethnic minority groups adding up to around 4,624,500. London is the most ethnically diverse population in the UK, and Wales the least. If all things were equal, members of ethnic minorities would appear in CJS statistics in similar proportions to their appearance in the general population. However, where data is available, BME people are over-represented in the CJS. For example, statistics show that in 2011/12 black people were six or seven times more likely to be stopped and searched than white people, while Asian people were three times more likely to be stopped and searched under the terrorism act 2000. When examining self-report studies and victim surveys statistics, contrast is noticeable. The British crime survey indicated that 44% of victims were able to say something about their offender, among these 85% of offenders were said to be white, ...read more.

As well as this, black people are five times more likely to be in prison than white people, and black and Asians are more likely to be serving lengthier sentences compared to whites. These imbalanced statistics further portray BME as criminals and unlawfully over-represented in the CJS, regardless of whether they are guilty or not. Outside of the CJS, some studies have identified the role of the media in exaggerating the crimes of ethnic minorities, therefore influencing the public view on them. For example, Hall (1979) identified the scapegoating of young black men in the â€˜muggingâ€™ moral panic of the 1970s. in 2000, Alexander investigated media reports into organised Asian gangs and found them to be mostly fabricated. One could argue that deviancy amplification is largely applied here. Due to media having a large impact on society today, it can be seen as one of the biggest reasons as to why BME are seen to commit more crime than others. The media often use the fear of crime as a way of selling their stories or to manipulate political attitudes, so they may demonise certain groups, including black and minority ethnic groups. ...read more.

However, As the CJS acts on these r****t stereotypes, minorities are prosecuted more and therefore appear more frequently in OCS. Moreover, Gilroy argues that minority ethnic crime is a form of political resistance against a r****t society and it has its roots in earlier struggles against British imperialism. This is due to the fact that most black and Asian people in the UK originated from former British colonies, where their anti-colonial struggles taught them how to resist oppression. Therefore, when facing r****m, they adopt similar forms of struggle to defend themselves, but their political battle was criminalised by British state. Gilroy argues that most of the crime committed by the working-class is an act of resistance to capitalism. To conclude, through research and evidence it is clear that people from ethnic minorities are seen as more likely to commit crime than others, whether this is accurate or not it is difficult to justify the truth due to limitations and criticisms within each form of evidence. Stereotyping plays a large role within these assumptions and allegations, and impacts the conclusions and results of such, which can lead to misjudgement and mistreatment of the undeserving, in this case BME. ...read more.