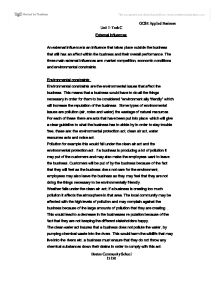 This affects how quick jaguar can achieve their aims and objectives. However at the Marriott hotel they will not be as affected as they just have to make minor changes such as changing the prices of their services. This means that their costs won't change by a lot because of the minor changes that they are making. Economic conditions: The last external influence that influences the way a business runs are economical conditions. The economic conditions is the way in which the current UK economy is working (Gross domestic product) the gross domestic product is calculated by how much money is earned and spent by the individuals, businesses consumers and the government. It is the government's duty to manage the UK's economy and has set 3 main objectives together with the Bank of England to ensure that the UK does not go into an economical crisis. The objectives are: * Steady Growth * Low unemployment * Low/stable inflation Steady growth is vital as it controls the money being spent and earned; steady growth makes sure that it increases steadily through time. By having steady growth it means that aspects such as the recession can be avoided and consumers are still able to buy and sell at reasonable prices. The level of employment is vital as if there is a high level of unemployment then it would mean that the consumers would not be able to buy anything. If this happens then it would mean that the first objective of steady growth will not be possible because of the fact that the consumers will be spending nothing at all. Unemployment is a consequence of recession, which is why these objectives combine to make sure that recession does not occur. Since the government is aiming for low unemployment and most consumers are working and receiving a good income this enables them to spend money allowing steady growth to happen. ...read more.

Whilst owned by ford they failed to make a profit in 10 years, this means that if they are taking out loans etc it would be difficult for them if interest rates are high. In terms of inflation rates again Jaguar are more affected as it would cost them more to produce and this would mean that they will have to raise the prices of their cars, if this happens then it would mean that they would have less customers as it would mean that they may not be able to afford the cars itself. It does not affect the Marriott that much as the room prices are fairly low so customers would not struggle as much to pay for the cars. Also the Marriott would not struggle as much because most of their customers are business customers meaning that they would not be worried as much about the price of the service. Jaguar is also far more reliant upon exchange rates than the Marriott is. As Jaguar buy there supplied from abroad they will need the strength of the pound to be high so that they keep their costs low, however if it is high then it would mean that they will be spending more and it would decrease their profits. Also as most of their customers buy from abroad they would want the exchange rate to be fairly high so that they do not have to spend that much but they would also want it to be fairly low so that customers abroad can still afford it, because of the fact that they are not in control it makes it a lot harder for them. Whereas the Marriott also buy their supplies from abroad they are minor supplies and they can find another supplier easier then the Marriott can as there product are more easily found then that of Jaguar. In conclusion Jaguar is more vulnerable to external influences. ?? ?? ?? ?? GCSE Applied Business Unit 1: Task C Heston Community School 13130 ...read more.