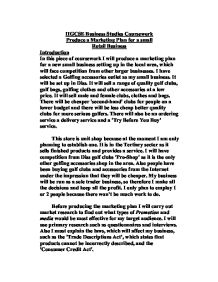 IIGCSE Business Studies Coursework Produce a Marketing Plan for a small Retail Business Introduction In this piece of coursework I will produce a marketing plan for a new small business setting up in the local area, which will face competition from other larger businesses. I have selected a Golfing accessories outlet as my small business. It will be set up in Diss. It will sell a range of quality golf clubs, golf bags, golfing clothes and other accessories at a low price. It will sell male and female clubs, clothes and bags. There will be cheaper 'second-hand' clubs for people on a lower budget and there will be less cheap better quality clubs for more serious golfers. There will also be an ordering service a delivery service and a 'Try Before You Buy' service. This store is unit shop because at the moment I am only planning to establish one. It is in the Tertiary sector as it sells finished products and provides a service. I will have competition from Diss golf clubs 'Pro-Shop' as it is the only other golfing accessories shop in the area. Also people have been buying golf clubs and accessories from the Internet under the impression that they will be cheaper. My business will be run as a sole trader business, so therefore I make all the decisions and keep all the profit. I only plan to employ 1 or 2 people because there won't be much work to do. Before producing the marketing plan I will carry out market research to find out what types of Promotion and media would be most effective for my target audience. I will use primary research such as questionnaires and interviews. Also I must explain the laws, which will affect my business, such as the 'Trade Descriptions Act', which states that products cannot be incorrectly described, and the 'Consumer Credit Act'. ...read more.

This could work to my favour because it means buying cheap clubs with more of a chance of selling them. It also shows that people care more about price than the brand of club. This will influence me not only to accommodate for the minority of golfers who can afford the more expensive brand clubs, but to accommodate for the less privileged golfers as well. Most of the golfers interviewed said that �400 wasn't too expensive for a set of brand new irons, which also means I should take the golfers willing to pay more for a set of clubs into consideration. A majority of golfers own brand name clubs such as Taylor Made which shows that although their clubs are second hand they are still brand clubs. This shows that people are willing to sell and buy brand clubs. The clubs people tend to use the most are lofted clubs, ranging from 7 irons to sand wedges. I will take this into consideration when selling single clubs, brand new or second hand. People hit the best shots with their Woods, mostly 3 woods, but also 7 Woods, Drivers and 5 Woods. I will take this into consideration when selling Woods, either brand-new or second hand. That will probably be the largest range of clubs being sold separately. In addition to this the club they hit the best shot with, was a brand club. The cosmetics of a club aren't considered an issue by any of the people I interviewed. Only 2 of the people interviewed owned custom fitted clubs, but the next question revealed that most of them would like custom fitted clubs, if it wasn't the price. Most of the people interviewed bought golf balls more than 13 times a year, which suggests that people buy lots of balls per year. Also, almost everybody interviewed felt that golf balls were overpriced. Of the people who answered 'yes' to having personal tutored lessons most said it made a difference to their game. ...read more.

The marketing plan itself is thorough and covers almost every aspect, which need to be taken into account when setting up a new small business. The advertising in local papers would be successful in real life because it would be relatively cheap and reach more of a realistic group of target customers (people in the local area). This would mean that the amount of people who wouldn't be customers is kept to a relative minimum. The other successful part of my business in real life would be the after sales support, which deals with customers broken or faulty clubs. This would assure buyers that if their expensive brand new club breaks it will be replaced. This would gain customers trust and would gain the shop free advertising by word of mouth. Things that could have been improved in the plan were more research into the questionnaire i.e. more questions and asking more people. This would have given me a broader more accurate idea of what customers want. This could be crucial to the sales of my business as not having exactly what the customers want could mean that customer going to another business that does. Another improvement could have been that I could have accurately researched the prices of the different advertising media, which I have taken into account. This could mean phoning national and local newspapers and radio stations. This would have been more accurate and might uncover different plans or prices of payment. The plan would help me achieve my aims such as being the number 1 choice in the area because with customer trust from the customer support people would feel safer buying from us. This would also increase the market share because the other golf shops would lose custom. Selling all the clubs and other golf accessories would generate profit if enough were bought. Helping this would be the advertisement on local papers and radio stations. Overall my plan would be successful because I have taken the customers needs over the boundary of consideration and based everything the shop sells on what the customers needs and wants are. ...read more.