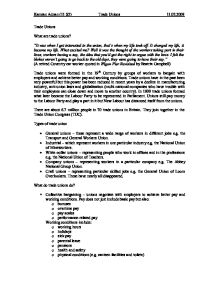 Trade Unions What are trade unions? "It was when I got interested in the union, that's when my life took off. It changed my life, it became my life. What excited me? Well it was the thought of the workers taking part in their lives, workers having a say, the idea that you'd got the right to argue with the boss. I felt the blokes weren't going to go back to the old days, they were going to have their say." (A retired Coventry car worker quoted in Wigan Pier Revisited by Beatrix Campbell) Trade unions were formed in the 19th Century by groups of workers to bargain with employers and achieve better pay and working conditions. Trade unions have in the past been very powerful but this power has been reduced in recent years by a decline in manufacturing industry, anti-union laws and globalisation (multi-national companies who have trouble with their employees can close down and move to another country). ...read more.

using the argument that a happy workforce is a more efficient and productive one * legal action - when employers break the law e.g. on health and safety * arbitration - sometimes trade unions and employers in dispute will agree to submit a claim to arbitration. An independent organisation called The Advisory Conciliation and Arbitration Service (ACAS) will act as a go-between to try to settle the dispute. * industrial action o Strikes - refusing to work. This can be continuous or for several days at a time. For a strike to be legal it has to be called by a union and voted on by the members. Strikers often picket the workplace - strand outside it to persuade other drivers not to deliver goods or other workers not to take their jobs. The right to strike and picket in Britain is very limited by law. o work to rule - working strictly to contract and banning overtime which can slow down production. ?? ?? ?? ?? Kamran Adnan (11 S2) Trade Unions 11.02.2008 ...read more.