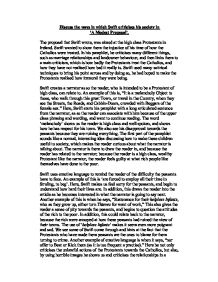 Discuss the ways in which Swift criticises his society in 'A Modest Proposal'.

Discuss the ways in which Swift criticises his society in 'A Modest Proposal'. The proposal that Swift wrote, was aimed at the high class Protestants in Ireland. Swift wanted to show them the injustice of his time of how the Catholics were treated. In his pamphlet, he criticises many different things, such as marriage relationships and landowner behaviour, and then links them to a main criticism, which is how badly the Protestants treat the Catholics, and how they have not realised how bad it really is. Swift used many satirical techniques to bring his point across and by doing so, he had hoped to make the Protestants realised how immoral they were being. Swift creates a narrator as so the reader, who is intended to be a Protestant of high class, can relate to. An example of this is, "It is a melancholy Object to those, who walk through this great Town, or travel in the Country, when they see the Streets, the Roads, and Cabbin-Doors, crowded with Beggars of the female sex." Here, Swift starts his pamphlet with a long articulated sentence from the narrator, as so the reader can associate with him because of the upper class phrasing and wording, and want to continue reading. The word 'melancholy' shows us the reader is high class and well spoken, and shows how he has respect for his town. ...read more.

The satirical technique works because the narrator talks about the peasants as if they were garbage, but at the same time, tells us that they are in a very bad condition, this makes the reader feel guilty for what they have done. Another technique that Swift uses is the use of inappropriate comparisons between people and animals. An example of this is "whereof only one fourth part to be Males, which is more than we allow to sheep, black cattle or swine." Swift uses this to show the reader how Catholics are treated as second-class citizens, and questions the reader's perception of society as a high, middle and low class one. Another example of this is when he says, "A child will make two Dishes at an Entertainment for Friends, and when the Family dines alone the fore of hind quarter will make a reasonable dish." Here Swift relates the children to a good meal, which again makes the reader think about what the Protestants, are doing and how immoral and cruel it is. He uses the words like 'fore' and 'hind' as if he were talking about an animal. These terms makes him seem as if it was a normal thing to do, as it is to eat lamb or pork. This technique works because it makes the reader think that what they are doing to them is not far off from what the narrator is suggesting, and makes them realise how horrible they are. ...read more.

Swift also includes some truth, to show how the Catholics are living and being treated. An example of this is when he says, "they are every Day dying, and rotting, by cold, and famine, and filth, and vermin." This use of truth creates feelings for the Catholics and makes the reader understand their position. These subtle digs at the affluent Protestants tell the reader they are to blame, this is shown when he says, "for Landlords, who as they have already devoured most of the Parents." This shows the mistreatment of the Catholics because they make them seem like murderers, something a high-class person would hate, and makes the reader realise of this and object to the idea. 'A Modest Proposal' has been written with two levels of meaning. The first is that Swift adopts a persuading false act, which is shown through the narrator, but reveals true anger and disgust at the indifferent attitude of landowners the rich and religious Protestants and the intolerance of his time. Swift's use of satirical techniques shows us what was happening at his time through a very different approach. He uses this approach to surprise and mock the readers, which is much more effective, because it makes the readers realise by comparing their ideas to horrible ones that they are in the wrong. This also makes the reader listen and realise better than just a pamphlet saying how bad the Protestants are. The use of satire helps people understand better, through a more enjoyable way and addresses the problem in a more empathetic way. ...read more.