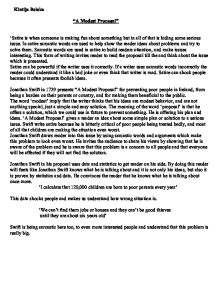 Kintija Belska "A Modest Proposal" 'Satire is when someone is making fun about something but in all of that is hiding some serious issue. In satire sarcastic words are used to help show the reader ideas about problems and try to solve them. Sarcastic words are used in satire to build readers attention, and make issues interesting. This form of writing invites reader to read the proposal till the and think about the issue which is presented. Satire can be powerful if the writer uses it correctly. If a writer uses sarcastic words incorrectly the reader could understand it like a bad joke or even think that writer is mad. Satire can shock people because it often presents foolish ideas. Jonathan Swift in 1729 presents "A Modest Proposal" for preventing poor people in Ireland, from being a burden on their parents or country, and for making them beneficial to the public. The word 'modest' imply that the writer thinks that his ideas are modest behavior, and are not anything special, just a simple and easy solution. ...read more.

He convinces the reader that he knows what he is talking about once more. 'I calculate that 120,000 children are born to poor parents every year' This data shocks people and makes us understand how wrong situation is. 'We can't find them jobs or houses and they can't be good thieves until they are about six years old' Swift is being sarcastic here too, to even more interested people and understand that this problem is really big. However, there are clues as to the real purpose of writing this proposal. Words like "Dropped from its dam... breeders," suggest that people are like and animals, and if we are able to eat animal meat, why we should not be able to eat humans meat? After presenting data, and the problem, Swift presents the solution, which is even more shocking for people. Once again he is convincing people that he knows what he is talking about. Swift says, that very well cooked baby is healthy - and will cause no problems for parents, using data like : "No one wants to buy children as slaves under ...read more.

done this a long time ago as it would make poor people richer, and would stop children being a problem for parents. Then Swift challenges other people to come up with an better idea, if they think that this is an acceptable, and he will support their ideas instead of his, this shows that Swift is really concerned about this problem and are ready to accept any other ideas. This also gives reader a confidence that Swift is not persuading people to accept his idea, but he is just suggesting the solution. He is also mentioning that he does not have any babies, and he does not make any profit from this proposal, he is just trying to help poor people who can't afford clothes for winter or food. In this proposal there is a really good use of words like "you, we, us, our" by that Jonathan Swift is trying to include people to his proposal, and make it everyone's concern. These words make us feel, as we are included. "As our city of Dublin" "I think that is agreed by all parties" ...read more.