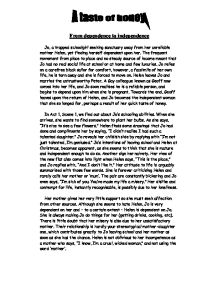 A taste of honey - From dependence to independence.

From dependence to independence Jo, a trapped schoolgirl seeking sanctuary away from her unreliable mother Helen, yet finding herself dependent upon her. The frequent movement from place to place and no steady source of income meant that Jo had no real social life at school or at home and few luxuries. Jo relies on a carefree black sailor for comfort, however, a facsimile of her own life, he is torn away and she is forced to move on. Helen leaves Jo and marries the untrustworthy Peter. A Gay colleague known as Geoff now comes into her life, and Jo soon realises he is a reliable person, and begins to depend upon him when she is pregnant. Towards the end, Geoff leaves upon the return of Helen, and Jo becomes the independent woman that she so longed for, perhaps a result of her quick taste of honey. In Act 1, Scene 1, we find out about Jo's schooling abilities. When she arrives, she wants to find somewhere to plant her bulbs. As she says, "It's nice to see a few flowers." Helen finds some drawings that Jo had done and compliments her by saying, "I didn't realise I had such a talented daughter." ...read more.

and he responds, "Not yet." Jo clearly seeks attention from Peter. He also has photographs of all his ex-girlfriends. Jo makes fun of his eye patch, again expressing her childish ways. We also find out about Jo's phobias, "I'm not frightened of the darkness outside. It's the darkness inside I don't like." This tells the reader that she feels dark and lonely inside, which sheds light onto why she has a depressing attitude to life. Helen neglects her needs, for example, leaving her alone for a weekend while she runs off with Peter. Helen also makes no attempt to help Jo when she's pregnant, if anything Helen is angry, perhaps because Jo has made the same mistakes she once made. Being the age of 16 some may say she is quite independent, leaving school and home, however she is still a na�ve child inside with a thirst for attention and affection Jo is not perturbed by her mother's actions, and is still determined to become independent. Her plans to move out are executed, and she decides she would like to marry a black sailor. Jo knows Helen will disapprove, which seems to make it the whole affair better. Jo's relationship with the sailor seems short and casual. ...read more.

Jo eventually realises that the baby will need a father figure and decides to let Geoff stay, but they wouldn't get married. Jo has mixed feelings about becoming a mother. She is intent on keeping the baby at first because she thinks it is cruel to have them aborted. She does, though, have some doubts. For example, she doesn't want to breast feed her baby. Geoff brings her a doll to practice holds on. She says the colour's wrong - the father being black - and explodes. She screams, "I'll bash its brains out! I'll kill it! I don't want to be a mother," which makes us think that she may have an abortion after all. Previously though, the baby kicked her and she was overwhelmed. All of these details then leave us wondering if she is ready for motherhood. It is more likely that she is ready to become a mother because she has matured a lot since the beginning of the play when she was dependent on Helen. As the play progresses, we see Jo turn from a na�ve young girl to a mature woman. She is no longer dependant on anyone and, although she is probably destined to a life living in small flats and houses, the prospects are bright and, as she sings at the very end, a glimmer of hope shines through and we think she may have a happy life. By Stephen Daly ...read more.