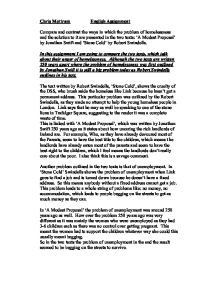 Although the two texts are written 250 years apart where the problem of homelessness was first outlined by Jonathan Swift it is still a big problem today as Robert Swindells outlines in his text.

Chris Mottram English Assignment Compare and contrast the ways in which the problem of homelessness and the solution to it are presented in the two texts: 'A Modest Proposal' by Jonathan Swift and 'Stone Cold' by Robert Swindells. In this assignment I am going to compare the two texts, which talk about their anger of homelessness. Although the two texts are written 250 years apart where the problem of homelessness was first outlined by Jonathan Swift it is still a big problem today as Robert Swindells outlines in his text. The text written by Robert Swindells, 'Stone Cold', shows the cruelty of the DSS, who brush aside the homeless like Link because he hasn't got a permanent address. This particular problem was outlined by the Robert Swindells, as they made no attempt to help the young homeless people in London. Link says that he may as well be speaking to one of the stone lions in Trafalgar Square, suggesting to the reader it was a complete waste of time. This is linked with 'A Modest Proposal', which was written by Jonathan Swift 250 years ago as it states about how uncaring the rich landlords of Ireland are. ...read more.

When Swift wrote the text, he wrote it to put the message across about homelessness and to make people laugh about what he wrote but also to make the rich more aware of how bad the problem of homelessness is in Ireland. These short paragraphs that Swift wrote are brief but the get right to the point and get the point across. On the other hand, Robert Swindells story is written in chapters. Each chapter contains an interesting story and lets the reader know what the cold winter is like for the homeless. 'Stone Cold' was written for the young people who are interested in the matter. Robert Swindells story is expressed through events, characters and description, and his anger at the way young homeless people are treated. For example when Link went to the DSS he was not able to sign up for the dole, again because of the problem of not having a fixed address. Swindells expresses his anger towards how he was treated when he said I might as well be speaking to a stone lion in Trafalgar Square. Swindells wrote about this particular event through the main character Link, where he expressed his own feelings with that comment. ...read more.

In 'A Modest Proposal' the solution to the problem is to getting rid of the homeless is, A man shall serve four women owned by a landlord, the women shall then have a baby and at a year old shall sell the babies to the landlords for them to either eat or sell and the women shall receive little money in the process, barely enough to survive. Where as in 'Stone Cold' the way in which the author gets rid of the homeless is through the psychopath. The psychopath kills off the homeless by planning whom he is going to kill and then leads them back to his house where he kills them. So as you can see the author's solutions to the problems are similar in a way as they both seem to kill the homeless to get rid of them, but the way they go about doing it is very different. Conclusion I preferred the 'Stone Cold' text because I like the action and the excitement it brings, as we don't know who will strike next. I think 'Stone Cold' gets the message across better because it is easier to understand. ...read more.