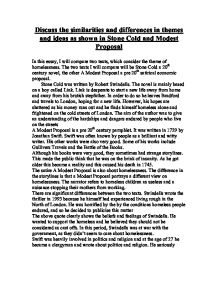 Discuss the similarities and differences in themes and ideas as shown in Stone Cold and Modest Proposal.

Discuss the similarities and differences in themes and ideas as shown in Stone Cold and Modest Proposal In this essay, I will compare two texts, which consider the theme of homelessness. The two texts I will compare will be Stone Cold a 20th century novel, the other A Modest Proposal a pre 20th satirical economic proposal. Stone Cold was written by Robert Swindells. The novel is mainly based on a boy called Link. Link is desperate to start a new life away from home and away from his brutish stepfather. In order to do so he leaves Bradford and travels to London, hoping for a new life. However, his hopes are shattered as his money runs out and he finds himself homeless alone and frightened on the cold streets of London. The aim of the author was to give an understanding of the hardships and dangers endured by people who live on the streets A Modest Proposal is a pre 20th century pamphlet. ...read more.

Swindells however partly wrote the book to influence youths about homelessness. Swift also wrote A Modest Proposal to criticise government policy as he had concerns about the quality of life the Catholics were living. Swindells thriller users the psychopathic character of Shelter to great effect. Shelter builds up suspense and tension throughout the book, making the reader guess his next move or victim. The quote below typifies Shelter at his aggressive best, as he also doesn't like homeless youngsters The suspense is intensified every time Shelter comes onto the scene. Link finds that all the people around him are disappearing. He becomes suspicious and starts to track down Shelter. The story reaches its climax when both Link and Shelter clash. Link is saves just in time from the grasp of Shelter, by the aid of his new friend and the police. Swindells mainly wrote the story on homelessness but Shelter is a parallel character to Link in the story but he is dangerous and predatory, making it full of tension and suspense. ...read more.

Through Link, Swindells shows everything about the life of the homeless youth, e.g. sleeping conditions eating conditions living conditions etc. The appalling conditions are revealed by Link in this quote Swifts ridiculous views are shown right from the start. As in the first paragraph, he shocks readers by saying how good a child will be for killing and then making then into food to sell Swift did not believe in abortions, as he was a catholic. He revealed that many people resorted to abortions because they could not afford to look after their children. The styles of both texts are very different Swindell's story is written from a first person's view. It is as if you are actually talking to Link. He wanted to change views of the public. He didn't want the public to think that the homeless were just 'lazy dossers' A Modest Proposal uses the 'I' often, but this is not Swift, it is an upper class person talking. Swift's Proposal at the time was very effective as the ridiculous views he gave reached out to people and make them sit up and take notice because it is a very clever satire. ...read more.