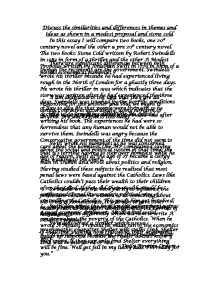 Discuss the similarities and differences in themes and ideas as shown in a modest proposal and stone cold.

Discuss the similarities and differences in themes and ideas as shown in a modest proposal and stone cold In this essay I will compare two books, one 20th century novel and the other a pre 20th century novel. The two books: Stone Cold written by Robert Swindells in 1983 in form of a thriller and the other A Modest Proposal written by Jonathan Swift in 1729 in form of a pseudo economical pamphlet. There are significant differences between both though the recipients are the government. Swindells wrote his thriller because he had experienced living rough in the North of London for a ghastly three days. He wrote his thriller in 1993 which indicates that the story was written after he had experienced the three days. Swindells was touched by the horrific conditions of day to day life that people were living in so he decided to do something about this. He quoted "I am dedicated to the idea that they are all responsible for one another and that we ought to conduct ourselves accordingly, doing no harm to anyone. My work reflects this belief." This clearly reflects the belief Swindells had after writing his book. ...read more.

He wanted to cause outrage and offence to make people aware of issues, to show how logic and reasoning can be dangerous. Swindells shocks his readers by producing a character that is breaking the law by committing first degree murder. "I strode out and he trotted at my heels like a ruddy poodle." "Cruel, I don't think so. He's neither cold nor hungry. Nobody wanted him so nobody will miss him, and there; one less dosser to clutter up the place. Who loses?" Daily Routine Orders 5 He sends out a mad man with a master plan of getting rid of all the homeless, just choosing his victims as he goes along. This is created to show the instability and dangers of the homeless. The character Shelter is presented as a psychologically unbalanced person who will kill whosoever gets in his way. The tone of Shelter when reviewing his killings is wicked, he speaks sardonically. Link portrays the dangers furthermore when he goes looking for his missing friend on the street. The way Link is lowered into Shelters flat makes the reader; the government realise how brutally dangerous it is for the homeless. ...read more.

Swift shows how little the Protestants care. He says the Protestants think the Catholics are full of diseases and are not worth working. They cause famine, cold and filth. This is what the persona does. It talks about the thought the Protestants have. This was a social concern that Swift had about the Catholics. The styles used in both novels are different; Swindells story is narrated from the first person. He is talking through his own experiences, he wanted to change peoples views as to what they thought of the homeless; disgusted self inflicted dossers who don't want to work, addicts who don't have anyone to blame but their selves. Although in A Modest Proposal the 'I' is not Swift. Swift is talking as an upper class protestant. Swift has effectively written a satire about the state of Britain at that time. I think that both pieces of text are very effective in what they are set out to do. They are effectual and powerful to a given extent and analyse their tasks thoroughly. Stone Cold describes the dangers of homelessness in detail while A Modest Proposal causes outrage amongst people to make them aware of issues. I conclude that both pieces are aimed at the government and would make a great effect in the laws for homelessness and Catholics. ...read more.