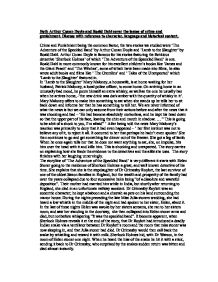 Both Arthur Conan Doyle and Roald Dahl cover the issues of crime and punishment. Discuss with reference to character, language and historical context.

Both Arthur Conan Doyle and Roald Dahl cover the issues of crime and punishment. Discuss with reference to character, language and historical context. Crime and Punishment being the common factor, the two stories we studied were 'The Adventure of the Speckled Band' by Arthur Conan Doyle and 'Lamb to the Slaughter' by Roald Dahl. Arthur Conan Doyle is famous for his stories featuring the fictitious detective 'Sherlock Holmes' of which 'The Adventure of the Speckled Band' is one. Roald Dahl is more commonly known for his excellent children's books like 'James and the Giant Peach' and 'The Witches', some of which have been made into films, he also wrote adult books and films like ' The Gremlins' and ' Tales of the Unexpected' which 'Lamb to the Slaughter' featured in. In 'Lamb to the Slaughter' Mary Maloney, a housewife, is at home waiting for her husband, Patrick Maloney, a local police officer, to come home. On arriving home in an unusually bad mood, he pours himself an extra whisky, as well as the one he usually has when he arrives home, -'the new drink was dark amber with the quantity of whisky in it'. Mary Maloney offers to make him something to eat when she stands up he tells her to sit back down and informs her that he has something to tell her. We are never informed of what the news is but we can only assume from their actions before and after the news that it was shocking and bad - 'He had become absolutely motionless, and he kept his head down so that the upper part of his face, leaving the chin and mouth in shadow. ... " This is going to be a bit of a shock to you, I'm afraid" ' After being told the news Mary Maloney's reaction was primarily to deny that it had even happened - ' her first instinct was not to believe any of it, to reject it all. ...read more.

Mary Maloney is actually a very clever person which is shown by her actions directly after the murder. The victim in 'Lamb to the Slaughter' is Patrick Maloney. When Patrick comes home, he is in an unexpected bad mood and is very short and nasty with Mary, we can only assume that this is unusual behaviour and he is usually pleasant. We can tell that he is tense and that that day is like no other because when he gets himself an extra drink there a couple of references to the unusual strength "she noticed the new drink was dark amber with the quantity of whisky in it...she watched him as he began to sip the dark yellow drink, and she could see little oily swirls in the liquid because it was so strong". Because Patrick is a police officer, he is seen as the one least likely, if any one, to get murdered because for a police officer to get murdered or to be the subject of any vicious crime was an extremely unlikely event. Police officers were thought of, like Sherlock Holmes, to be able to spot the smallest, however unlikely, but plausible way of murder. They were also well respected in the community. Jack Newman is Roald Dahl's way of subverting this view. Jack Newman, the detective in this story, when he is at the Maloney's house accepts a drink from Mary Maloney, when Sherlock Holmes would have most definitely refused. He also concludes that a "heavy blunt instrument, almost certainly a large piece of metal", must have caused the blow to the head. He does, however, eat the evidence and weapon of murder. Sherlock Holmes on the other hand, if he had been faced with this exact same case, would have thought of every possibility, including the use of something frozen. The settings in both stories are vital. Each story is particular to the place and time it is set. ...read more.