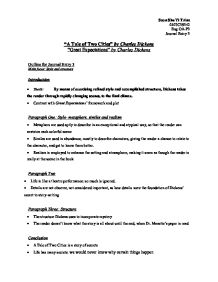 By means of exercising refined style and accomplished structure, Dickens takes the reader through rapidly changing scenes, to the final climax.

Soon Shu Yi Trina 0107C39342 Eng OA-P3 Journal Entry 3 "A Tale of Two Cities" by Charles Dickens "Great Expectations" by Charles Dickens Outline for Journal Entry 3 Main focus: Style and structure Introduction * Thesis: By means of exercising refined style and accomplished structure, Dickens takes the reader through rapidly changing scenes, to the final climax. * Contrast with Great Expectations' framework and plot Paragraph One: Style- metaphors, similes and realism * Metaphors are used aptly to describe in an exceptional and atypical way, so that the reader can envision each colorful scene * Similes are used in abundance, mostly to describe characters, giving the reader a chance to relate to the character, and get to know them better. * Realism is employed to enhance the setting and atmosphere, making it seem as though the reader is really at the scene in the book Paragraph Two * Life is like a theatre performance: so much is ignored. * Details are not observe, not considered important, as how details were the foundation of Dickens' secret to story-writing Paragraph Three: Structure * The structure Dickens uses to incorporate mystery * The reader doesn't know what the story is all about until the end, when Dr. ...read more.

Antoine, "(Hunger) was prevalent everywhere." Thus, metaphors, similes and realism alleviate and enhance the development of the intricate plot and shaped the lives and disposition of each character. "All the world's a stage, men and women merely actors." (Wordsworth) This statement, poetic as it was supposed to be, is true to a certain extent. On stage, we can pretend to be anything or be anywhere; there are no limits. In life, we lack details. Many of us disillusion ourselves by ignoring certain facts or even certain people and events, making life a continuous theatre performance. In A Tale of Two Cities, Dickens exploits all methods of description, adding detail into every aspect of each incident. In the story, we read about the poverty of the French peasants, and can even feel their hunger and the misery they live in. Yet when in life there is so much of this, which is even more real than what is in a book, which is being ignored. Ironic as it seems, Dickens wrote this book in terms of the stage, and thus, without limits to how far he can reach. ...read more.

This is a story of secrets, reflecting how we can never understand the innermost thoughts and feelings of even those closest to us. No one can really know how Dr. Manette felt during his 18 years in prison, or why he would relapse during times of stress. When Darnay asks the Dr. for his daughter's hand, even the Dr. does not know her true feelings on the matter. No one will ever know what caused Carton , brilliant and talented, to become so unmotivated and alienated. Why does Miss Pross still have such loyalty for her brother, even though he treated her badly? Who can really understand why Madame DeFarge has such hatred for the St.Evr�monde family? Some secrets are eventually revealed, some remain a mystery. This book reflects to us also that we would never know why certain things happen, as the story tells us of the irony of fate, played by a "hand of cards." As the story goes, life is like a performance, where no one knows what will happen next. To conclude this final journal entry in the words of Dickens himself, "A wonderful fact to reflect upon, is that every human creature is constituted to be that profound secret and mystery to every other." 2 ...read more.