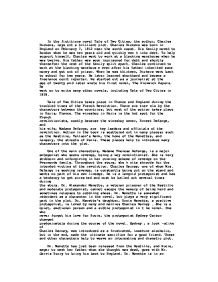 The fictitious novel Tale of Two Cities, by Charles Dickens.

In the fictitious novel Tale of Two Cities, the author, Charles Dickens, lays out a brilliant plot. Charles Dickens was born in England on February 7, 1812 near the south coast. His family moved to London when he was ten years old and quickly went into debt. To help support himself, Charles went to work at a blacking warehouse when he was twelve. His father was soon imprisoned for debt and shortly thereafter the rest of the family split apart. Charles continued to work at the blacking warehouse even after his father inherited some money and got out of prison. When he was thirteen, Dickens went back to school for two years. He later learned shorthand and became a freelance court reporter. He started out as a journalist at the age of twenty and later wrote his first novel, The Pickwick Papers. He went on to write many other novels, including Tale of Two Cities in 1859. Tale of Two Cities takes place in France and England during the troubled times of the French Revolution. There are travels by the characters between the countries, but most of the action takes place in Paris, France. ...read more.

These and other characters help to weave an interesting and dramatic plot. Dr. Manette has just been released from the Bastille, and Lucie, eager to meet her father whom she thought was dead, goes with Mr. Jarvis Lorry to bring him back to England. Dr. Manette is in an insane state from his long prison stay and does nothing but cobble shoes, although he is finally persuaded to go to England. Several years later, Lucie, Dr. Manette, and Mr. Lorry are witnesses at the trial of Charles Darnay. Darnay, earning his living as a tutor, frequently travels between England and France and is accused of treason in his home country of France. He is saved from being prosecuted by Sydney Carton, who a witness confuses for Darnay, thus not making the case positive. Darnay ended up being acquitted for his presumed crime. Darnay and Carton both fall in love with Lucie and want to marry her. Carton, an alcoholic at the time, realizes that a relationship with Lucie is impossible, but he still tells her that he loves her and would do anything for her. ...read more.

Sydney Carton, making the ultimate sacrifice, partly for Lucie, goes to the guillotine in place of Charles. Just before he dies, Carton has a vision in which society is greatly improved and the Darnays have a son named after him. This dramatic plot revolves around several central themes. One theme involves revenge. One's bad side is brought out by the evil effects of revenge. Madame Defarge is the main subject of this implicit theme. She turns into a killing machine because she must get revenge. An example of this is when she finds out Charles Darnay is an Evermonde and is going to marry Lucie Manette. She knits Darnay's name into the death register. Another key theme in the novel has to do with courage and sacrifice. There were many sacrifices in this novel by many different characters. The ultimate sacrifice was made by Sydney Carton. Because of his love for Lucie and his friendship with Darnay, Carton is the example of one of the most important themes implied in this book. Carton helps others, and does not think so much of himself. Right before going to the guillotine, Carton sees a better world, a world where he gave to others, not thinking of himself. These themes help outline an interesting story. ...read more.