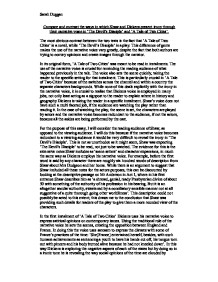 Compare and contrast the ways in which Shaw and Dickens present irony through their narrative voice in 'The Devil's Disciple' and 'A Tale of Two Cities'.

Compare and contrast the ways in which Shaw and Dickens present irony through their narrative voice in 'The Devil's Disciple' and 'A Tale of Two Cities'. The most obvious contrast between the two texts is the fact that 'A Tale of Two Cities' is a novel, while 'The Devil's Disciple' is a play. This difference of genre makes the use of the narrative voice vary greatly, despite the fact that both authors are trying to convey opinions and create images through the narrator. In its original form, 'A Tale of Two Cities' was meant to be read in instalments. The use of the narrative voice is crucial for reminding the reading audience of what happened previously in the tale. The voice also sets the scene quickly, taking the reader to the specific setting for that instalment. This is particularly crucial in 'A Tale of Two Cities' because of the switches across the channel and within a country the separate characters backgrounds. While none of this deals explicitly with the irony in the narrative voice, it is crucial to realise that Dickens voice is employed in many jobs, not only least acting as a signpost to the reader to explain where in history and geography Dickens is taking the reader in a specific instalment. ...read more.

This meant his audience would recognise his commentary on the issues. Dickens welcomed his reputation as a social reformer: this was why he commented on the societies in question so readily. The same is true of Shaw. The American War of Independence was not such recent history for Shaw, but it had many parallels to the Irish wars, which had proximity to Shaw. To the same extent, the comments on the American society can be translated to fit that of his own, and his criticisms are just as valid when considering the American war, as well as the Irish conflicts. Through subtle irony Shaw, like Dickens, is mocking society. They both are trying to point out the flaws in the social systems which they live in. Shaw is mocking the insincerity of religion through the character of Mrs Dudgeon, while Dickens is mocking the greed and corruption of the ruling classes like the Marquis and Mr Stryver. Neither Dickens, nor Shaw uses their irony when the emotional tension is high. This is so as not to detract from the genuine emotions which they have used with the previously mentioned 'real' characters to which audiences can empathise. In the traditions of melodrama Dickens and Shaw both try to go to the extremes of emotion and to be ironic in these scenes, such as Judith's plea for Richard to say who he is and save his life act 3. ...read more.

Despite the difference in genres, I believe Dickens and Shaw use narrative irony in a similar way, to achieve a similar result. Both authors wish to deride the society of which they are creating a parody. Both are trying to establish a way of highlighting the excessive points of their society by creating hyperbolic characters which they can ridicule, or situations that can be mocked by the narrator itself. For example in an introductory passage to 'The Devil's Disciple' Shaw writes, 'They have convinced both Americans and English that the most high minded course for them to pursue is to kill as many of one another as possible, and that military operations to that end are in full swing, morally supported by confident requests from the clergy of both sides for the blessing of God on their arms.' this sentence is ironic to the reader because the reader can see the fault in both sides, as it seems obvious to an objective person that both are wrong. This type of irony is not for comic affect, nor relief, but for Shaw's political aim of illustrating how pointless the war is and how ironic it is that neither side can realise the opposition's point of view or how ironic it is that they are trying to use the same force against one another. (2,305) Sarah Duggan ...read more.