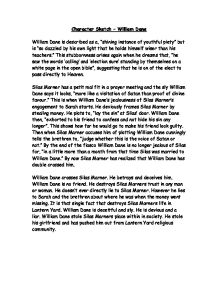 Character Sketch - William Dane William Dane is described as a, "shining instance of youthful piety" but is "so dazzled by his own light that he holds himself wiser than his teachers." This stubbornness arises again when he dreams that, "he saw the words 'calling' and 'election sure' standing by themselves on a white page in the open bible", suggesting that he is on of the elect to pass directly to Heaven. ...read more.

He deviously frames Silas Marner by stealing money. He plots to, "lay the sin" at Silas' door. William Dane then, "exhorted to his friend to confess and not hide his sin any longer". This shows how far he would go to make his friend look guilty. Then when Silas Marner accuses him of plotting William Dane cunningly tells the brethren to, "judge whether this is the voice of Satan or not." ...read more.