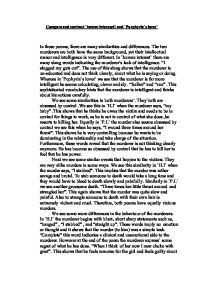 Compare and contrast `human intersest1 and `Porphyria`s lover` In these poems, there are many similarities and differences. The two murderers are both have the same background, yet their intellectual manor and intelligence is very different. In `human interest` there are many slang words indicating the murderer's lack of intelligence. "I slogged my guts out". The use of this slang shows that the murderer is un-educated and does not think clearly, about what he is saying or doing. Whereas in `Pophyria`s lover` we see that the murderer is far more intelligent he seems calculating, clever and sly. "Sullen" and "vex" .This sophisticated vocabulary hints that the murderer is intelligent and thinks about his actions carefully. We see some similarities in both murderers'. They both are obsessed by control .We see this in `H.I` when the murderer says, "my baby" .This shows that he thinks he owns the victim and needs to be in control for things to work, as he is not in control of what she does ,he resorts to killing her. Equally in `P.L` the murder also seems obsessed by control we see this when he says, "I wound three times around her throat". ...read more.

Therefore she doesn't have much respect or seem highly regarded as a person. On the other hand in `P.L` the woman has a much higher status. This is shown when the murderer says, "When glided in Porphyria". The use of the word "glided" suggests angelical and royal characteristics of Porphyria. "Glided", it is as if she glides though the house like an angel, elegantly and gracefully. This suggests high status because she seems to have confidence and femininity and the murderer sees her as a thing of beauty and highly respects her as a woman by using the word "glided" to describe her. We then see some similarities in the poems. Both victims do not expect the murder and in both it seems to happen on impulse. We see this in `H.I` "she turned away". This suggests that she needed to run away from the situation and she felt scared and threatened .The word "I stabbed" implies that the murder was a quick action and that the victim had no time to get away. Equally we see this in `P.L` as the murderer says right before killing her "perfectly pure and good". ...read more.

"Brought her a silver chain with a silver heart". Today, gold is one of the most expensive metals to buy ,silver is far less expensive .This symbolises that perhaps the `other bloke` doesn't care for her totally and maybe he sees her as second best .This may symbolise that he does not love her as much as the murderer loves her. Similarly in `P.L` symbolism is used to show the relationship in the poem. In the opening verse, "it tore the elm tops down for spite". This reveals some interesting facts about the relationship between Porphyria and the murderer. This quote symbolises that the murderer is the wind "tearing off the elm tops" and that the victim is the "elm tops". The use of this symbolism subtly hints at what is going may happen to Porphyria. Also the word "spite" indicates negativity and anger, resulting in an indication of what may happen in the later events. Overall, I feel that these poems have both similarities and differences. Although the poems are written at different times and are of different length and structure. I feel that the meanings behind the murders are very similar and the two murderers are alike in character in hidden ways. Which lead me to believe that these poems are very similar. ...read more.