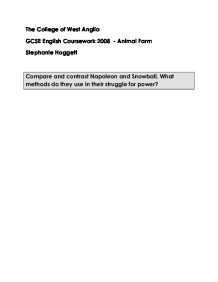 Compare and contrast Napoleon and Snowball. What methods do they use in their struggle for power?

The College of West Anglia GCSE English Coursework 2008 - Animal Farm Stephanie Hoggett Compare and contrast Napoleon and Snowball. What methods do they use in their struggle for power? Napoleon and Snowball are the two principal characters in George Orwell's novel 'Animal Farm'. Published in 1945 the plot is a satirical allegory of Soviet totalitarianism where animals play the roles of key Bolshevik revolutionaries and overthrow the human owners of Manor Farm. The story describes how the original ideology of socialism is changed and manipulated by Snowball and Napoleon as they fight for the leadership role. The essay will compare and contrast the methods used whilst placing the story in the context of the communist regime of Joseph Stalin between the two world wars. The story begins when the respected old boar 'Major' calls the animals of Manor Farm to a meeting in the barn. In an inspiring speech he talks of a dream where animals are no longer exploited by humans, and teaches them a revolutionary song 'Beasts of England'. This scenario alludes to the situation in Russia prior to the 1917 revolutions when Socialists and Bolsheviks' planned to overthrow the tyrannical rule of Tsar Nicholas II. ...read more.

The dogs are given the job of guards or police to oversee the work of the rest of the animals. These measures are designed to maintain and further Napoleons power and influence over the other animals (the working classes) in the same way that Stalin established a ruthless 'secret service' called the KGB. The pigs show their elitism by having exclusive access to the milk and apples. Snowball, like Trotsky is a good strategist. In chapter four the humans try to recapture 'Animal Farm'. Snowball carefully plans a strategy and takes command; thanks to his brilliant tactics the animals succeed in driving the humans away. Snowball is acclaimed as a hero, and the 'Battle of the Cowshed' is declared a national holiday to commemorate the saving of the farm; in a similar way to the Soviets celebrating the anniversary of the November 1917 revolution by parading through Red Square in Moscow. Soon the struggle for leadership between Snowball and Napoleon becomes apparent as the two disagree on virtually everything, and when Snowball suggests building a windmill to ease the burden of farm work, as Stalin sought to modernize the Soviet Union in his 'Five Year Plans'; Napoleon immediately opposes the idea. ...read more.

Eventually the Seven Commandments are reduced to a single phrase 'All animals are equal, but some animals are more equal than others'; at a dinner party Napoleon announces his alliance with the humans, abolishes the principles of the revolution and changes the farms name back to 'Manor Farm', events had turned full circle. This novel can be viewed on several levels. Firstly as a 'Fairy Story' for youngsters where a farm is taken over and run by animals. Second as an allegory of the Russian Revolution as mentioned earlier an alluded to throughout the text. Finally on a deeper level it illustrates how political elites are replaced by new elites that are subsequently corrupted by power in the same manner as their predecessors, and seek to rule in a similar or too often more tyrannical manner. More modern examples such as Mao Zedong (Mao Tse Tung) and Tito exist to prove this theory. George Orwell wrote the story to highlight and this issue, no wonder he was unable to find a publisher until after the Second World War when the Soviet Union ceased to be a close ally of Britain. BIBILOGRAPHY 1. George Orwell - Animal Farm 1945 2. Animal Farm - Film (1999) 3. York Notes - Animal farm 4. Wikipedia ?? ?? ?? ?? ...read more.