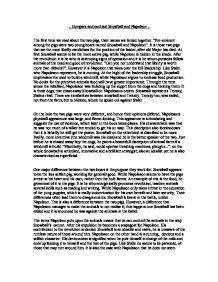 Compare and contrast Snowball and Napoleon.

" Compare and contrast Snowball and Napoleon " The first time we read about the two pigs, their names are linked togother. "Pre-eminent among the pigs were two young boars named Snowball and Napoleon". It is those two pigs that are the most likelly candidtaes for the position of the leader, after old Major has died. At first Snowball seems to be the more active pig, while Napoleon is hidden in the shade. After the revoultuon it is he who is destroying signs of opression and it is he whom pursades fellow animals of the need and good of revolution. "Can you not understand that liberty is worth more than ribbons?". However it is Napoleon that takes over the full leadership. Like Stalin who Napoleaon represents, he is cunning. At the hight of the leadership struggle, Snowball emphesises the need to build a windmill, while Napoleaon argues to increase food production. No doubt for the primitive animals food will have greater importance. ...read more.

"Electricity, he said, could opertae threshing machines, ploughs...". on the whole Snowball is articulate, innovative and a brilliant strategist, also an idealist yet he is also characterised as superficial One major difference between the two boars is the purpose they work for. Snowball appears to be the less selfish pig, working for generall good. While Napoleaon seems to have the pigs intrest at his heart and his own, rather then the hole farms. An example of this is the food, he givesmost of it to the pigs. It is he who energetically promotes revolution, teaches animals several skills such as reading and writing. While Napoleaon only takes intrest in the education of the yung puppies, which is really indoctrination for his own benefit and later security. Their differences often lead them to disagreements. Snowball is brave in the battle, unlike Napoleon. This is also a difference between the two pigs. However, a difference that Napoleaon manages to make the animals to not realise it, this happens one Snowball has been exiled and it is anounced he was against the animals in the battel. ...read more.

While Snowball says "The only good human being is a dead one". This lack of sentiment suggests coldness on his part and makes the reader wonde how much different the revolution would have been under this pig. Snowball also has a characteristic of domination, he agrees to the seizieng of apples for the pigs in chapter 3. After Snowball has been chased away from the farm, Napoleaon uses him as a scape goat. He cant admit his own mistakes (often a quality of dictators) and uses Snowball to blame. Such was the case when the windmill "Do you know the enemy who has come in the night and overthrown our windmill?SNOWBALL." Snowball is the societys enemy, used to blame for all that goes wrong and to provide reasons for lack of sucess. It is the illusion of Snowball as the destroyer that does not allow the animals to question the actual leader. Napolaons attitude towards snowball is distant and he tends not to agree with the pig. "Napoleaon took no intrest in Snowballs comitees" Both the vision and character differ the pigs, the thing that unites them is the vision on the start of the book. ...read more.