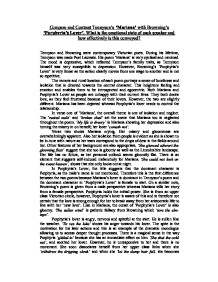 Compare and Contrast Tennyson's 'Mariana' with Browning's 'Porphyria's Lover'. What is the emotional state of each speaker and how effectively is this conveyed?

Compare and Contrast Tennyson's 'Mariana' with Browning's 'Porphyria's Lover'. What is the emotional state of each speaker and how effectively is this conveyed? Tennyson and Browning were contemporary Victorian poets. During his lifetime, Tennyson was made Poet Laureate. His poem 'Mariana' is very cyclical and minimal. The mood is depressive, which reflected Tennyson's family traits, as Tennyson himself was very susceptible to depression. However, Browning's 'Porphyria's Lover' is very linear as the action clearly moves from one stage to another and is not so repetitive. The remote and rural location of each poem portrays a sense of loneliness and isolation that is directed towards the central character. This heightens feeling and emotion and enables them to be introspected and egocentric. Both Mariana and Porphyria's Lover as people are unhappy with their current lives. They both desire love, as they feel frustrated because of their lovers. However, the two are slightly different. Mariana has been dejected whereas Porphyria's lover needs to control the relationship. In verse one of 'Mariana', the overall theme is one of isolation and neglect. The 'rusted nails' and 'broken shed' set the scene that Mariana too is neglected throughout the poem. 'My life is dreary' is Mariana showing her depression and also turning the misery in on herself; her lover 'cometh not'. ...read more.

The tree is a masculine symbol. The fact that there is only one tree suggests that there is only one man for her and because he doesn't come, there's no chance for Mariana's life to change. The symbolism picks up over the next few verses. The end of the stanza shows how the cycle continues for Mariana because she is back to saying how 'Her life is dreary' and repeats the same order until the last verse. The vocabulary used in verse five is more violent and visual than the nature words before. The poem moves into her room on the first line, 'And ever the moon was low.' The white curtain is the symbol of Mariana's fading light and hopefulness as the shadow starts to cover the curtain. The curtain is like Mariana's white flag as she surrenders to hope of a change. Her emotions are portrayed really well as 'Wild winds bound within their cell.' The winds pick up at the same time as her emotions and she is again like the sluice because her thoughts are held up like the water. The shadow of the tree falling across the bed is a clever way of showing he s****l frustration because only the tree's shadow will ever be on her bed, not the real man. ...read more.

The verse ends with 'I am very dreary' and 'He will not come'. She is now more tired than ever before and gives up on all hope of her lover coming. We know this because she uses definitive future tense for the first time in the poem. She accepts it but is not happy about it and even cries because of it again. Both central characters appeal to God at the end of the poems. Porphyria's lover is in another world. He thinks that God endorsed his actions, 'God has not said a word.' Mariana realises that the only way to overcome her problem is to kill herself, 'O God, that I were dead!' Another similarity is obvious here because both solutions are death but the difference is that Mariana but must commit suicide. 'Mariana' is very much a Victorian feminist poem in stressing female passivity, which was very prominent in that era. 'Porphyria's Lover' reinforces the idea of male activity and dominance compared with females having the over ruling power. Both poems are very successful in portraying desperate situations but focus on different points. Tennyson is very effective in showing a switch in power and the thought process of the central character. However, Browning's depiction of detail around Mariana's entrapment is most impressive. The way we can see her life going round and round in circles with amazing background ingredients is fantastic imagery by Tennyson. Therefore I think Mariana is more effective. ...read more.