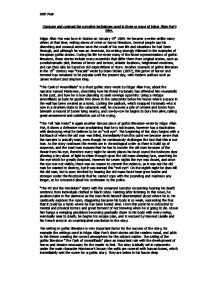 Compare and contrast the narrative techniques used in three or more of Edgar Allan Poe's tales.

Compare and contrast the narrative techniques used in three or more of Edgar Allan Poe's tales. Edgar Allan Poe was born in Boston on January 19th 1809. He became a writer unlike many others at that time, writing stores of crime or horror literature. Several people say his disturbing and unusual stories were the result of his own life and situations he had been through, and although he was an American, his writing strongly followed in the examples of European gothic stories. During his life he wrote many of the finest representations of gothic literature, these stories include many essentials that differ them from original stories, such as a melodramatic plot, themes of terror and torture, sinister locations, heightened emotions, and can they also be based on old superstitions or fears. Another example of gothic literature in the 19th century was "Dracula" wrote by Bram Stoker (1897), this genre of horror and torment has remained to be popular until the present day, with modern authors such as James Herbert and Stephen King. "The Cask of Amontillado" is a short gothic story wrote by Edgar Allan Poe, about the narrator named Montresor, describing how his friend Fortunato has offended him repeatedly in the past, and how he is now planning to seek revenge upon him. Using a vintage amontillado as bate he guides him down to the catacombs below his house where a space in the wall has been created as a tomb. Locking the padlock, which strapped Fortunato who is now in a drunken state to the catacomb wall, he uncovers a pile of cement and bricks from beneath a mound of bones lying nearby, and row-by-row he begins to bury him alive, taking great amusement and satisfaction out of his crying. "The Tell Tale Heart" is again another famous piece of gothic literature wrote by Edgar Allan Poe, it shows a defensive man proclaiming that he is not insane, however has a fascination with destroying what he believes to be an "evil eye". ...read more.

Whenever it fell upon me, my blood ran cold; and so by degrees - very gradually - I made up my mind to take the life of the old man, and thus rid myself of the eye for ever". Edgar Allan Poe does not give a in depth description of the antagonist, however we do know that he is an "old man" and that he has cataracts on his eyes, this is what is making the narrator think that they are evil. We are left with our own interpretation of what the man is like. We are however given a clue, which is that, we now that he is a pleasant man from the quote "He had never wronged me. He had never given me insult". Again like the "Cask of Amontillado" the story is wrote in first person and is although the author is retelling the story. In "The Pit and the Pendulum" there is only one main character, this is the man who has heard his death sentence and is now being tortured in the prison, and he is also the narrator recounting what has happened to him. The only other characters in the story are the Spanish army who are torturing the man. The protagonist begins the story with a recollection if a previous trial in which he now finds himself in a dungeon room being held capture. Throughout the story the character is faced with many situations for example mental and physical torture also facing death many times until eventually he is saved and released by the French army. Again like "The Cask of Amontillado" and "The Tell Tale Heart", the Pit and the Pendulum is wrote in first person, and therefore gives the effect of the author retelling the story. All three of these stories share the same pattern of how the characters are used and represented in the gothic stories. ...read more.

During the story there is heightened emotions and build up of terror and tension, there is a melodramatic plot and a sinister location of deep underground where no one can hear them in the family tomb. The protagonist in the "Pit and the Pendulum" is the man who is being tortured, heightened emotions are shown in this story through the terror and fear of death. There is lots of melodrama like in the other two stories as the torture is being dragged out. Once again like in many of Edgar Allan Poe stories the setting is very sinister, as he is in a damp black room containing a pit in the middle, covered in rats. There are themes of good versus evil and life versus death in this story. All these factors of the gothic genre are used to recognize and understand these stories, based in selective features which they contain. By looking at the three stories wrote by Edgar Allan Poe, "The Pit and the Pendulum", "The Tell Tale Heart" and the "Cask of Amontillado", I can see that there are many similarities between them. The main resemblance is that they have all been wrote in first person, the effect of this is that it draws you into the story and gets the reader involved, I think Edgar Allan Poe has chose to use this on all three of these gothic stories as the reader then has an advantage to understanding what is happening in the tale. Another similarity between all three of these stories is the setting. In a gothic story the setting is usually sinister and dark as this helps to the overall effect the story has on its audience, in each story the location is isolated and usually in a dark room. The use of language is also very similar in these three stories, in each of them there is use of hyphens and short sentences all to build up suspense and tension. ?? ?? ?? ?? Beth Mair ...read more.