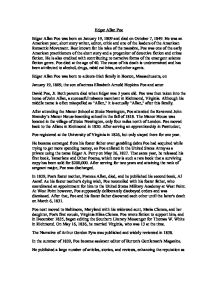 Edgar Allan Poe Edgar Allan Poe was born on January 19, 1809 and died on October 7, 1849. He was an American poet, short story writer, editor, critic and one of the leaders of the American Romantic Movement. Best known for his tales of the macabre, Poe was one of the early American practitioners of the short story and a progenitor of detective fiction and crime fiction. He is also credited with contributing to narrative forms of the emergent science fiction genre. Poe died at the age of 40. The cause of his death is undetermined and has been attributed to alcohol, drugs, rabid cat bites, and other agents. Edgar Allan Poe was born to a Scots-Irish family in Boston, Massachusetts, on January 19, 1809, the son of actress Elizabeth Arnold Hopkins Poe and actor David Poe, Jr. Both parents died when Edgar was 3 years old. ...read more.

After serving for two years and attaining the rank of sergeant major, Poe was discharged. In 1829, Poe's foster mother, Frances Allan, died, and he published his second book, Al Aaraf. As his foster mother's dying wish, Poe reconciled with his foster father, who coordinated an appointment for him to the United States Military Academy at West Point. At West Point however, Poe supposedly deliberately disobeyed orders and was dismissed. After that, Poe and his foster father disowned each other until the latter's death on March 6, 1831. Poe next moved to Baltimore, Maryland with his widowed aunt, Maria Clemm, and her daughter, Poe's first cousin, Virginia Eliza Clemm. Poe wrote fiction to support him, and in December 1835, began editing the Southern Literary Messenger for Thomas W. White in Richmond. On May 16, 1836, he married Virginia, who was 13 at the time. The Narrative of Arthur Gordon Pym was published and widely reviewed in 1838. ...read more.

He returned to New York, where he worked briefly at the Evening Mirror before becoming editor of the Broadway Journal. There he became involved in a noisy public feud with Henry Wadsworth Longfellow. On January 29, 1845, his poem "The Raven" appeared in the Evening Mirror and became a popular sensation. The Broadway Journal failed in 1846. Poe moved to a cottage in the Fordham section of The Bronx, New York. He loved the Jesuits at Fordham University and frequently strolled about its campus conversing with both students and faculty. Fordham the Bells." The Poe Cottage is on the southeast corner of the Grand Concourse and Kingsbridge Road, and is open to the public. Virginia died there in 1847. Increasingly unstable after his wife's death, Poe attempted to court the poet Sarah Helen Whitman. Their engagement failed, purportedly because of Poe's drinking and erratic behavior; however there is also strong evidence that Miss Whitman's mother intervened and did much to derail their relationship. He then returned to Richmond and resumed a relationship with a childhood sweetheart, Sarah. ...read more.