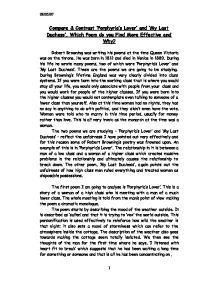 Compare &amp; Contrast 'Porphyria's Lover' and 'My Last Duchess'. Which Poem do you Find More Effective and Why?

Compare & Contrast 'Porphyria's Lover' and 'My Last Duchess'. Which Poem do you Find More Effective and Why? Robert Browning was writing his poems at the time Queen Victoria was on the throne. He was born in 1812 and died in Venice in 1889. During his life he wrote many poems, two of which were 'Porphyria's Lover' and 'My Last Duchess'. These are the poems we are going to be studying. During Browning's lifetime England was very clearly divided into class systems. If you were born into the working class that is where you would stay all your life, you would only associate with people from your class and you would work for people of the higher classes. If you were born into the higher classes you would not contemplate even talking to someone of a lower class than yourself. Also at this time women had no rights, they had no say in anything to do with politics, and they didn't even have the vote. Women were told who to marry in this time period, usually for money rather than love. This is all very ironic as the monarch at the time was a woman. The two poems we are studying - 'Porphyria's Lover' and 'My Last Duchess' - reflect the unfairness I have pointed out very effectively and for this reason some of Robert Browning's poetry was frowned upon. An example of this is in 'Porphyria's Lover'. The relationship in it is between a man of a low class and a woman of a higher class which creates massive problems in the relationship and ultimately causes the relationship to break down. ...read more.

was suffering because of their relationship, this could again be interpreted as him trying to convince himself that he did the right thing and it was for the best. He then says, 'Porphyria's love: she guessed not how Her darling one wish would be heard.' Here he is saying how she would never have guessed how he was going to make sure that he would be the only person she was ever going to be with; which is again loving in a twisted way. He sits with her all night in the same position as if he never wants to let the moment go. The last thing he says is, 'And yet God has not said a word!' This is like he has blocked everything out and is not listening to his conscience which would be telling him that he'd done wrong. The man in this poem is quite insane which is quite obvious with the murder he commits, although it was not pre-meditated or planned at all. The second poem we are studying is 'My Last Duchess' again by Robert Browning. In this poem we have an extremely wealthy Duke who is talking to an unknown person; as the poem progresses we find that he is a man that values loyalty and must have control over people. The poem opens with the line, 'That's my last Duchess painted on the wall' This line alone lets you into the Dukes mind set a little, with the word 'last' suggesting that there have been others before and will be more after, this shows that he treats women like disposable possessions and doesn't mind them coming and going. ...read more.

The line lengths in both these poems is quite similar too, they have quite short lines although it isn't restricted to a certain number of syllables. These two things show that Browning is quite an ordered person but not obsessively so. The punctuation works the same way in both poems - it isn't restrictive at all, it is placed where it is needed so allows both poems to flow. The language used in the poems is representative of the person who we are hearing, for example in 'Porphyria's Lover' the language is simple as the man would not have received much education being in the lower classes but in 'My Last Duchess' the Duke, who would have been well educated, uses more complex language. These two poems would have been frowned upon in the times they were written as they can be interpreted as derogatory to the class system at the time. One of them points out how the classes could not mix and the other one shows how the upper class has total control of those below them and can quite literally get away with murder. I believe that the poem 'Porphyria's Lover' is the more effective of the two. I think this because the rhyming scheme is more effective and the ending is more definite. Also the use of the simile when he compares the woman's eyes to 'A shut bud that holds a bee' I think is particularly effective and is my favourite part of both poems. I also think that it makes the problems of the class systems more obvious than 'My Last Duchess'. So in conclusion the poem I think more effective is 'Porphyria's Lover'. 08/05/07 1 ...read more.