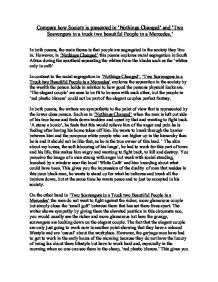 Compare how Society is presented in 'Nothings Changed' and 'Two Scavengers in a truck two beautiful People in a Mercedes.'

Compare how Society is presented in 'Nothings Changed' and 'Two Scavengers in a truck two beautiful People in a Mercedes.' In both poems, the main theme is that people are segregated in the society they live in. However, in 'Nothings Changed' this poems explores racial segregation in South Africa during the apartheid separating the whites from the blacks such as the 'whites only in caf�' In contrast to the racial segregation in 'Nothings Changed', 'Two Scavengers in a Truck two Beautiful People in a Mercedes' explores the separation in the society by the wealth the person holds in relation to how good the persons physical looks are. 'The elegant couple' are seen to be fit to be seen with each other, but the people in 'red plastic blazers' could not be part of the elegant couples perfect fantasy. In both poems, the writers are sympathetic to the point of view that is represented by the lower class person. Such as in 'Nothings Changed' when the man is left out side of his true home and feels down trodden and upset by that and wanting to fight back. ...read more.

On the other hand in 'Two Scavengers in a Truck two Beautiful People in a Mercedes' the men do not want to fight against the richer, more glamorous couple but simply close the 'small gulf' between them that has set there lives apart. The writer shows sympathy by giving them the elevated position in this circumstance, you would usually see the richer and more glamorous but here the grungy, scavengers are looking down on the elegant couple. The fact that the elegant couple are only just going to work now is another point showing that they have a relaxed lifestyle and are 'casual' about the workplace. However, the garbage men have had to got to work in the early hours of the morning because they do not have the luxury of being lax about there lifestyle but have to work hard and, especially in the morning when no one can see them in the cheap, 'red plastic blazers.' This gives you the image of rugged looking men that are embarrassed by the way they look and with dirt under there fingernails and on there faces but they have sparkling eyes that represent the dream and prosperity they have for the luxurious lifestyle. ...read more.

The men in 'Two Scavengers in a Truck two Beautiful People in a Mercedes' are seen to be 'vermin' and are not treated with the same respect as everyone else but as a lower class because of what they do. They show slight anger in the form of bitter remarks about the couple in the Mercedes 'the cools couple' may be seen as a remark that they this may be because they do not think it fair that the people in the Mercedes are treated any different just because they are in a Mercedes. Because when everything it brought down to its bare minimum everyone in the world is the same. In Nothings Changed' it is evident that he is bitter because of the actions he uses 'I back from the glass, leaving small mean O of small mean mouth' he is like a child when he is younger and wants something really badly but cannot have it. It is as if he is forbidden to go and look at the white, not to mention to be with them. ...read more.